Free Cake For Every Creature // The Bluest Star

Sometimes it's the soft moments that hit you the hardest.

by Nick Warren
View ProfileTwitterInstagramRSS Feed
August 15, 2018 at 10:15 AM 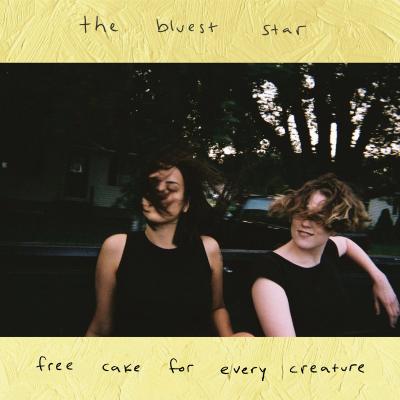 Free Cake For Every Creature

Anyone already familiar with the band Free Cake For Every Creature will already be on board for The Bluest Star. For those that aren't aware of the magic that songwriter Katie Bennett is capable of, they're in for a beautiful treat. Channeling the hushed whispers of Kimya Dawson and the freewheeling musical thrust of Frankie Cosmos, Bennett has found a wonderful footing. On this album, things are just a touch more upbeat, and that extra BPM or two goes a long way. Unlike her last two releases, the album begins with a steady and determined pulse. The first three tracks continue to climb in tempo, into the sugary twee energy of "Whole World Girl," with the ensuing bedroom hypnosis of "Shake It Out" being one of the most successful moments. Through its substantial 14 tracks, feelings cycle through, with Bennett illustrating her emotions with a tear-inducing brilliance. In what should be considered one of the top songs of the entire year, "Be Home Soon" pairs a stream-of-consciousness subway monologue with a simple and wonderfully repetitive chord progression that makes profundity out of the little moments that life holds. Sometimes it's the soft moments that hit you the hardest. — Nick Warren