Percussionist Matt Walker chats about what to expect

by Nick Warren
View ProfileTwitterInstagramRSS Feed
July 17, 2019 at 11:15 AM 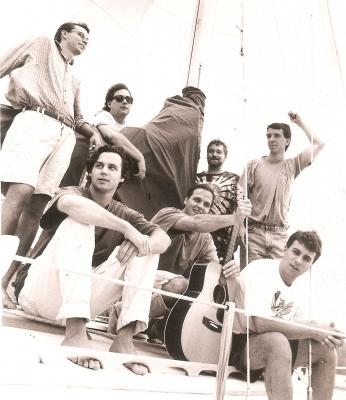 With a headlining spot on one of the remaining 8 Great Tuesday events, the genre-bending alternative rock favorite Plato's Cave is set to reunite. During the 1990s, the band recorded albums including Funkus Spelunkus and Free Nick Stein, complete with its forever-etched-in-memory imagery. We sat down with percussionist Matt Walker to get the details for the upcoming gig.

Nick Warren: What inspired this reunion?

Matt Walker: They asked us to play and we said, "indeed."

NW: What is the band lineup for this show, and where are they traveling from?

NW: How does this differ from past reunions?

MW: We've done a few benefits for friends with serious health issues, an art scholarship benefit, an 8 Great Tuesdays in 2013, and a bar mitzvah in Telluride. Last time we had one drummer. This time we have two drummers. More drums.

NW: Will this be similar to last winter's King's Rook Club show?

MW: This time we plan on rehearsing. It will be mostly Plato's Cave material with a few choice covers thrown in. Eric Brewer, Rodger Montgomery, and Ron Yarosz will all be on hand so there may be some jam sessions. We will bust out one or two new songs, too.

NW: What makes Plato's Cave's music something that people (fans and band members alike) want to keep coming back to?

MW: We are a song-oriented band. The lyrics matter and the musical vibe is uplifting. Sometimes political, sometimes sentimental, sometimes goofy. Like life. We were a jam band before the term jam band came out. Plus, we were lucky in that we had chemistry and knew a lot of people. Before social media, we would pick up the phone and ask our friends to come out and spread the word. We made posters and put them all over town. That grassroots approach of finding people who like the same music as we do was the only way we knew how to build a scene.

NW: How did Plato's Cave embody that special spirit alive in Erie's music scene of the 1990s?

MW: Our core influences were The Dead, Neil Young, The Allman Brothers, and other hippie bands. So, it helped that the best local venues wanted the same music that we play. Lightning in a bottle. Erie is no doubt a special place with an intense creative community. Venues like the old 420 State St., Docksider, and the Beer Mug nurtured scenes where bands really felt appreciated. You could be a foot away from the musicians, so the crowd was part of the band. Erik and Randy are entertaining frontmen who are good at connecting with people and breaking down the wall between band and audience.

NW: In your opinion, is that spirit still around?

MW: That spirit is still around wherever someone is willing to pay a $3 cover charge to support live original music.

NW: What are the first things that people bring up to you when they talk about Plato's Cave?

MW: They wonder if Nick Stein has been freed yet. It won't be over till they clear his name and give him back the time he's done. Put in a prison cell, but one time he could-a been the champion of the world. They wonder if the coupons for a free side of gravy fries with the purchase of a meatball omelet is still valid.