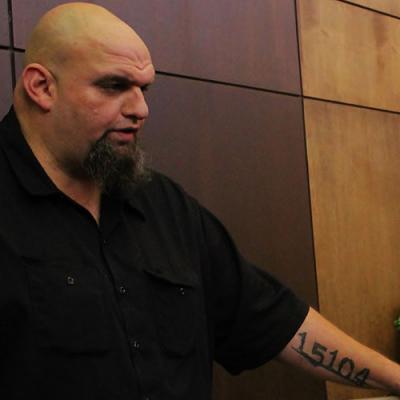 In August of 2013, then-Mayor of Braddock, PA, John Fetterman, came to Erie to speak at the Jefferson Educational Society as hosted by Destination Erie (now Emerge 2040). The following was the Erie Reader's first reporting on the now Senator-elect:

Braddock Mayor John Fetterman was introduced in Erie last week as a figure who's controversial in more ways than one.

Organizers of his Destination Erie-hosted talk at the Jefferson Educational Society prefaced that further by suggesting Fetterman, as the forward-thinking (and demonstrably forward-acting) mayor of the Pittsburgh region's by-far poorest town, is, in some of those ways, a renegade politician whose approaches and actions sometimes even run counter to the very spirit of American democracy.

But Fetterman doesn't seem to see it that way – and, in his unpolished but plenty clear manner (the kind that suggests he's not much of a politician at all), he said so.

"I never saw myself or felt myself as [being] controversial," Fetterman said. "And I don't think what we're doing [in Braddock] is particularly controversial, or esoteric."

Rather, Fetterman said, what's being done to rethink, revitalize, and repurpose Braddock out of its ruins of industrial collapse is a reasoned response to the town's situation – and the only hope for its future.

Here's Braddock's past in brief: The site of Andrew Carnegie's first steel mill (along with Carnegie's first library), the 20,000-plus-population borough was a bustling, brimming-with-business, 20th Century model of affluence born of industry. But between the middle and end of the last century, it became an extreme model of the effects of industrial abandonment, losing 90 percent of its businesses – and 90 percent of its population.

It was "a massive implosion," unequaled in American history, Fetterman said, and it put Braddock "literally at the bottom of the food chain," both economically and socially. "It's a community incredibly starved for resources."

If "you genuinely care about the community," moving forward from that reality demands that "you do what you can do," said Fetterman.

Not just talk in circles, not just plan on paper, but do. Take the empathy out of the realm of the abstract, and do.

Since taking office in 2005, Fetterman has devoted his work as mayor – a technically part-time position that pays about $150 a month – to practical, hands-on actions to make Braddock's streets safer; establish youth employment programs; attract artists to its cheap and available working and living spaces; and pursue urban renewal and redevelopment projects.

Of course, there's little room in that new space for old ways of thinking, for the business-as-usual model of municipal leadership. It seems for more process-oriented, politics-prone leaders and planners, that's what's sort of scary about Fetterman; what puts him on their fringe even as he's brought the town, its plight, and the work toward its renewal into the national discussion and international spotlight.

He's been dubbed by The Guardian as "America's coolest mayor," by the New York Times as "The Mayor of Rust," and featured in Rolling Stone as "The Mayor of Hell." He's done numerous TEDx talks, appeared on The Colbert Report, and brought Braddock into the headlines (and not the 'if it bleeds, it leads,' kind) of major news publications and programs across the country.

On my way to Fetterman's talk last week, news hosts on National Public Radio were giving details on one of the latest developments out of the borough: The mayor's recent officiating, despite a state ban, of the first same-sex marriage in Allegheny County.

It's been over five years since Braddock last had a homicide. Between 2006 and 2011, Fetterman said, 911 calls to the borough's police department dropped by about 50 percent. And last month, he said, there wasn't a single shots-fired call – the first non-statistic of its kind in approximately 30 years.

"I don't consider that controversial," said Fetterman. "The thing I care about most," he added, is that – by whatever means work – "things continue getting better. The direction is more important than the plan."

In Erie, and throughout the Rustbelt, those in power positions need to recognize that and adapt – and the sooner, the better.

"I happen to believe in marriage equality... I'm sure there are some people in this crowd" who don't feel at all at the same, said Fetterman. "We can agree to disagree, I guess."

Looking at the full, emerging picture, however, no one can disagree that his and other like minds' approaches are affecting very real changes for the better in Braddock.