Fucked Up // Dose Your Dreams 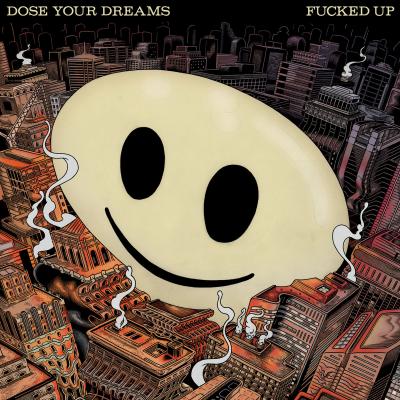 Toronto's Fucked Up return for their fifth studio LP, the staggeringly ambitious Dose Your Dreams. For a band that's broken all manner of boundaries and expectations with every release they've put out, that's certainly saying something. Coming in at 82 minutes split between 18 tracks, this beats the 2011 masterpiece David Comes To Life by five minutes. It's longer, and it feels like it. Unlike that album, there's an odd fatigue that comes with listening to this in its entirety. It is however, still brilliant, blending hardcore with shoegaze and dozens of other subgenres (at least check out the Bosstones-esque opening track). Fucked Up elevate the genre of punk and hardcore, continuing to raise the stakes for their peers. Frontman Damian Abraham, one of the most charismatic frontmen working today, delivers when he's called upon, but shares the vocal duties with 16 others over the course of the record, including a dozen people not in the formal lineup of the band, including J. Mascis, Miya Folick, and Jennifer Castle. While the variety is appreciated and used wisely, it causes the listener to frequently check the tracklisting, taking you out of  the immersive experience that many of the tracks offer. – Nick Warren

Christine and the Queens // Chris