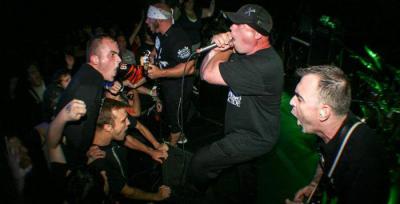 With eighteen bands on the bill, there hadn't been a show of this size in the Erie scene since the 2011 St. Corey's Day.  The anticipation leading up to this day was phenomenal, and the expectations were equally as high.  But on the eve of the fest, it was announced that The Banner, Homewrecker, and Tolerate all had to drop off the bill, all for personal reasons, and the day of the show Dead End Path also had to drop because of transportation issues.  This certainly dampened the mood of the evening, but it wasn't enough to ruin the show.

The bands that had dropped were replaced at the last minute by Syracuse's EgoDestroys and Pittsburgh's Hindsight, both of which were excellent additions and fit right in with the rest of the bill.  EgoDestroys' vocalist even gave a shout out to the Erie hardcore scene during their set, citing it as being a key factor as to why he got involved with hardcore music in the first place.

The show lasted close to twelve hours, and reviewing every single band's set would take up an obnoxious amount of space, but the bands that stood out most to me were Smoke & Mirrors, KDC, Black Mask, Soul Control, and of course, Earth Crisis.

Smoke & Mirrors features members of an older generation of Erie hardcore bands, including Shockwave, Seven Stitches, and Problem Solver Revolver, and their experience in these bands shines through in their music.  Their set consisted mostly of songs off of their most recent album Flagship released on Down For Anything Records.   Their melodic hardcore sound at times reminds me of the early albums of one of my favorite bands, Comeback Kid.

KDC's was sound different from the average hardcore band, using dissonant chords and showing a more metal influence creating a chaotic but interesting sound.  During their set the band's vocalist expressed his appreciation to be able to play in front of the large crowd of people at the festival, instead of playing to nearly empty rooms at their home in Buffalo.

One of the best crowds of the night was for Punxsutawney's Black Mask.  The band plays a dynamic combination of fast paced powerviolence mixed with slow, sludgy breaks and overly fuzzed guitars.  I was impressed enough to buy their EP Lost Below on 7" vinyl after their set.

The next to last band, and only secondary headliner not to drop, was Soul Control.  Their music was much more melodic than every other band on the bill, sounding more like a cross between alt rock and hardcore punk, which was a nice change of pace from just one hardcore band after another.

Around 11:15 p.m., Earth Crisis finally took the stage.   By then, a noticeable amount of the crowd had already left, which is upsetting since Earth Crisis was the highlight of the show.  If not for the music, they should have at least stayed to see such a historic band in action.  I'm not exactly familiar with very many Earth Crisis songs myself, but I still stayed for just that reason.  Their music is nostalgic of a time when breakdowns weren't lame, and they didn't have any shortage of them, especially in their straight edge anthems "The Discipline" and "Gomorrah's Season End".

All that being said, I was actually a little disappointed with the crowd participation at this show.  Instead of being packed towards the front of the stage, people stood scattered all around the room, leaving empty pockets speckled across the floor.   There was also a significantly less moshing than I expected from a show like this. Even for Earth Crisis' set, most of the moshing was done by the same five to ten people who had seemingly acted as the show's designated "mosh crew".  It seems to me that show goers in Erie have gotten too used to the size of the old BT, and still need time to adjust to the bigger venue.

Nonetheless, the first Gem City Fest was an overall success, and I can't wait to see who the Schang brothers bring to Erie next year.