Get Bombed at Darlene's

Crazy things happen at bars, but this is just ridiculous.

by Cory Vaillancourt
View ProfileFacebookTwitterGoogle+RSS Feed
September 2, 2013 at 9:40 AM 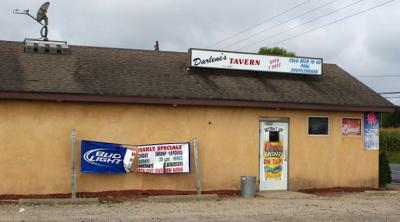 We've all been there - you're sitting in your favorite local tavern one quiet Thursday night, minding your own business, enjoying 50 cent chicken wings and throwing back a beer or ten, when all of a sudden...

Except - at least for patrons of Darlene's Tavern in the small eastern Maryland town of Sudlersville - it was not the result of cheap beer and Jaegerbombs.

It was an actual bomb.

During a training mission, an A-10 Warthog ground-attack aircraft operated by the Maryland National Guard accidentally released a bomb that landed just feet from the bar's entrance.

According to Peter Herman of the Washington Post, "It wasn't until a customer glanced out a window, saw smoke and yelled that someone's Buick might be on fire that people put down their beers and rushed to the door... customers were too busy and the music too loud for anyone to hear it, and even some people sitting outside at picnic tables were oblivious."

When owner Lena Hartlove finally decided to investigate what she thought was a pipe bomb hurled at her establishment, she found a 3-foot deep smoking crater in the parking lot.

Police officers were called to the scene and began poking around; when they regcognized bomb-like fins among the smoldering wreckage, they must have figured that this stiuation was probably beyond their pay grade.

Luckily, the bomb was only an inert training bomb, but it still had the potential to do significant damage; weighing in at 35 pounds, measuring two feet long, and dropped from the skies at hundreds of miles per hour, it's certainly bomb enough.

So the next time you're out at your favorite little watering hole drinking beer and throwing your cares to the wind, remember: you could get bombed at any time; you might as well go ahead and order that next plate of wings.