Get Into The Groove

Erie's Best Band favorably judged and booked for their covers, but has more in store for 2019 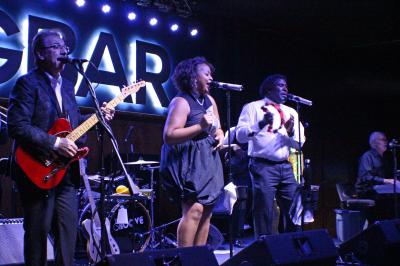 How often do you get nine people on the same page?

Almost never, which is what makes Erie-based funk-and-R&B collective The Groove such a fascinating case study.

The band, recently voted Erie's Best in 2018, has become a shining example of workplace synergy. Their secret?

"We just love being together," explains guitarist and manager Tony Ferrara. "I look forward to practice, to being around my band family every time we rehearse."

When your band doubles as a close-knit family, you're always working from home (if you can call having the time of your life "work"). And this group — featuring the dynamic duo of Roy Hollis Jr. and Brittany Morton on lead vocals, Ferrara on guitar, Tim Papotnik on keys, Wayne Howard on bass, Anthony Stefanelli on drums, Brian Hannah on trumpet, Kent Tucker on trombone, and Geoff Wands on saxophone — is perfectly within their element on the stage. And off it —they don't hesitate to mingle with their audiences, even mid-performance.

"We are an entertainment band," Hollis clarifies. "We move about the stage, do different steps, go into the crowd and interact with the people, get them involved. We just have fun."

And that makes all the difference, especially to those who would lump them in with any other run-of-the-mill "cover band." For better or worse, the "cover band" label often implies uninspired, replacement-level musicianship, but The Groove exuberantly disproves this notion. Not only are they talented musicians who play their parts with technical proficiency, but they also dress and act the part with tremendous charisma. They wholeheartedly immerse themselves in their source material and sell it to the audience as if it were their own — and if the packed dance floors are any indication, people have bought in.

Of course, you cannot put on a feel-good show without feel-good music, and that is the primary test any song must pass before being added to the band's vast repertoire (Ferrara estimates it near the 100-song benchmark). First of all, it must feel good to the audience — something recognizable and immediate, compelling them to shake what their mamas gave them.

"We don't necessarily want to educate people on music," says Ferrara. "What matters is do they recognize it and can everyone have fun with it?"

Secondly, it must feel not only good but also right for the performers, in particular the two powerhouse vocalists of Hollis and Morton. Hollis rose to prominence through the competition circuit, traveling to cities throughout the country in the Sound Choice and Talent Quest karaoke contests with his wife, finally breaking through in the late 2000s and early 2010s after years of near-misses. Ferrara and Hollis, who were acquainted through the Motown-tribute band Crosstown Rhythm & Blues, sought to form their own separate band around that same time frame and auditioned several female singers, but could not find the right fit. That changed when Hollis received a call from Morton, winner of the 2011 Erie Idol singing competition.

"They are an incredible combination," Ferrara effuses. "Roy through his background will do these steps, and Brittany will start doing the same thing. Then there's the vocal aspect of what she brings. I believe a female vocalist of her caliber only comes along once in a generation, as far as people that are able and willing to sing professionally."

Beyond being great singers, the two are great listeners, which helps spice up and add the original "twists" to arrangements the band prides itself in. Ferrara compares Hollis to a "coach" with an innate understanding of how each band member might best execute their assignment for a successful and well-orchestrated play. "Roy will hear little things and point them out, like 'this needs to be here' or 'can we do that?'"

"When I'm learning my part, the instruments are bleeding in on my mind," Hollis explains. "Brittany is amazing in that she can hear something in one song and then something in another song, and ask 'Can we blend those?'"

She has such a knack for it, in fact, that she has been delegated master show coordinator. While Ferrara books the gigs (fairly evenly divided between public and private events), Morton is the one who decides what they will play, compiling a fresh set list each week. The bulk of those set lists are constructed from R&B crossover hits from the late '70s through early '90s, when artists such as Earth, Wind, and Fire, Chaka Khan, Michael Jackson, and Whitney Houston ruled the airwaves. However, do not be surprised if the occasional jock jam (C+C Music Factory), yacht rock staple (Steely Dan, Toto), or recent Top 40 smash (Bruno Mars, Pitbull) trickles its way into the mix.

And everyone is totally okay with that. "Another thing I love is everyone is humble in this band. And when you feel like you can continue to grow and learn, you can go far," says a grateful Hollis.

"The key to our success is the fact that we understand what we're trying to achieve, we know we haven't reached it yet, and we're all kind of realistic with what the plan is," Ferrara elaborates. "2019 is going to be an interesting year for us. We're going to further our show, as well as bring out an original song or songs."

A full album is unlikely, but Ferrara would like to flesh out some ideas. "I've never been much of a lyricist. A truly gifted songwriter can come up with both music and lyrics, but we have others in band that can help." For instance, they might turn to Russell Howard, their bassist's brother and a talented multi-instrumentalist, who has already self-produced several tracks of his own.

For now, though, they graciously thank Best of Erie voters who paid them the ultimate respect not as a cover band, but a band. With chemistry like theirs, it's not hard to stay in The Groove.

Matt Swanseger is taking your song requests now at mswanseger@eriereader.com