Glen Strother Project Bops Over to the Rook 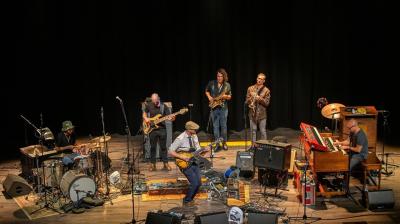 Comprised of some of the best-established (and best) jazz-hearted artists from the fine city of Pittsburgh and surrounding areas — with no less than the band's virtuosic namesake at the helm — The Glenn Strother Project is never caught slouching in the sonic sense.

Strother, perhaps most well-known locally for his past work with now-defunct jazz/funk/space-groove powerhouse Jazzam (and other bands like The ChopShop and Arkesh), has most recently assembled GSP, describing it as "everything I've wanted to do wrapped into one project: A little bit of everything I've ever written mixed in with a lot of what I like!"

He's working on it with current/former/rotating members of other progressive and much-dug regional outfits including Wreck Loose, Starship Mantis, Chrome Moses, and The Commonheart, as well as friendly/funky affiliations with members of other groups like Poogie Bell Band and Boogie Hustlers (just to name a couple).

For fans of new-school jazzy-funky, the Project's for-real well worth checking out. And they're hitting the King's Rook Club upstairs stage no less. Cool, cats: Give us that stuff. — Ryan Smith