Tonight's featured speaker at the Jefferson Educational Society is not the same Thomas Mann that wrote "The Magic Mountain," but he has written books.

by Jay Stevens
View ProfileFacebookTwitterGoogle+RSS Feed
November 12, 2013 at 10:45 AM 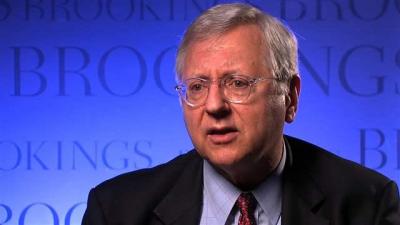 Tonight, the Global Summit at the Jefferson Educational Society continues. (Again, and as always, check out my preview of the whole event.)

What: "The President, Congress, and the Challenges of Foreign Policy: Looking Back and Looking Forward"

Why: Mann is a fellow at the Brookings Institution, a Washington-D.C.-based think tank. He's a pollster, professor, and an expert on Congress. Together with former Summit-er, Norman Ornstein, he wrote The Broken Branch: How Congress is Failing America and How to Get It Back on Track and its sequel, It's Even Worse Than It Looks: How the American Constitutional System Collided with the New Politics of Extremism.

Why He's Cool: He said this in a recent Brookings Q&A: "There is a strong tendency on the part of the mainstream media to avoid taking sides—in other words, to avoid reaching conclusions that put the onus of our dysfunctional politics on one party or another or on one candidate or another. This can be strength in an era in which the partisan and ideological media have grown in size and importance. But it can also be a trap that does a disservice to the citizenry."

Not to Be Confused With: Thomas Mann, the German novelist, who wrote "The Magic Mountain." That Mann did say in a 1940 speech that "freedom and equality, the two basic ideas of democracy, are to some extent contradictory" -- which pretty much sums up the warring Congressional ideologies right now.

A Note about the Brookings Institution: Despite many attempts to do so, pinning down the Brookings Institute's political leanings is hard to do. In 1977, Time called the Brookings Institute, "the nation's pre-eminent liberal think tank." In a 1998 post, the media watchdog site, Fairness & Accuracy in Reporting, noted "Brookings is commonly, and inaccurately, dubbed 'liberal'…It's called 'centrist' almost as often, but never 'conservative,' though that label would be more accurate than 'liberal.'" Many of its members are prominent Democrats, but Brookings scholars were ardent supporters of, say, President Bush's invasion of Iraq.