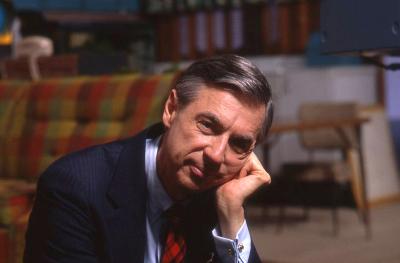 Oftentimes, the secret to making a great meal is simply choosing the finest ingredients possible. Some things are just so pure and delightful that it's hard to mess them up. Mr. Rogers' Neighborhood is one of those things. Won't You Be My Neighbor is a documentary about the work of television personality Fred Rogers, and it uses its ingredients wisely and tastefully. From Morgan Neville, the director of the Oscar-winning 20 Feet From Stardom, this film tracks Rogers' humble beginnings, starting in 1954 with his work in The Children's Corner for WQED in Pittsburgh, and how an impromptu technical snag gave birth to one of Rogers' longest-running and best-known characters, Daniel Striped Tiger. The movie uses Daniel in several beautifully animated segments that serve as transitional bumpers, usually to express more abstract emotions and editorial notions. Taking cues from standard biographical storytelling, the film interviews key people in Rogers' life — mostly his family and coworkers — and plays like a veritable greatest hits record. Anyone who appreciates Fred Rogers will already be familiar with many of these clips. His 1969 Senate subcommittee testimony, Daniel's song with Lady Aberlin "Sometimes I Wonder If I'm a Mistake," or "Many Ways to Say I Love You" with Officer François Clemmons (one of standout talking heads toward the end of the film) are just a few of the incredibly moving moments that occurred on tape during Rogers' long career. The overwhelming goodness and loving graciousness of Fred Rogers shines through here perfectly. You can be happy that there are no real surprises, no dark secrets here, that Fred Rogers (a Presbyterian minister) lived the life he preached. Emotionally wrenching in the best way, it was safe to say that there wasn't a dry eye in the house during the screening I attended. There easily could have been a longer cut of this movie and it would have been welcome, and considering some of the numerology contained within, perhaps they should have shot for a runtime of 143 minutes. — Nick Warren

Cash Rules Everything Around Me

by Forest Taylor7/18/2018, 1:30 PM
Sorry to Bother You is Bizarre, Hilarious and Brilliant
Mister Rogers's NeighborhoodDocumentaryWon't You Be My NeighborPittsburghMovie Review