A year after Riverside there's still plenty of atmosphere and events abounding at this inaugural event. 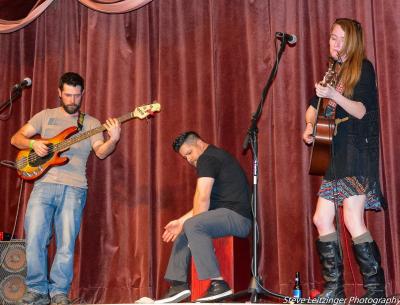 This year marks the first incarnation of the Cambridge Springs Music Festival. If it seems familiar, there's a reason.

Over the years, the Riverside Music Festival grew to become the region's unofficial kickoff to festival season. Sure, sometimes there was snow during the April dates, but the atmosphere was undeniably welcoming.

"I think it broadened the scope of what 'community' was at the festival," said Justin Moyar, one of the principal organizers of the festival. "It encompassed the essence of what a music festival is by letting music become the atmosphere."

After the loss of the historic Riverside Inn, that all changed. While the picturesque hotel itself is gone, the memories remain, and it's up to us to create plenty of new ones.

Evolving and adapting to the circumstances, Moyar along with the Cambridge Springs Fire Department have launched a new free celebration of local music.

With performances all weekend long happening on multiple stages, there will be plenty to see and hear. Seeking to recreate the welcoming spirit the festival always instilled, Moyar admitted that "the one thing I hope is that the tradition of people playing music throughout the event continues." With hopes that the feeling will reach well beyond the grounds of the inn, he explained that "the other thing I hope is that they will have a chance to visit and experience more of Cambridge Springs. With so many new businesses going into town and other ones that exist now, my hope is that people have a great experience and want to come back and visit again before the next festival."

The main stage (named the B.I.G. Stage after the Bush Investment Group) will be on the Fireman Carnival Grounds, a few short blocks from the site of the Inn, on the same northern side of French Creek. The Broke Boland Band will kick things off at 5 p.m. on Friday, with the Silver String Band closing things out at 3 p.m. on Sunday. Nineteen different local vendors will be on hand at the festival marketplace, with crafts, food, and more to take in. There will also be a beer garden featuring an array of tempting ales and lagers, including the wares of Hardwaters Brewing and Riverside Brewing — who are slated to open their new site on the former grounds of the Riverside Inn. In addition, guests will be welcome to bring their own instruments and play together on the open jam stage — a wonderfully common sight that would wrap around the porches.

Across the creek will be the Park Stage, where the gazebo will house 18 locally beloved acoustic-based acts playing throughout the weekend, including Clever Norman, Tommy Link, and Claire Stuczynski.

The Villa will be the site of the Rock Cabal Stage, featuring 27 bands from Friday to Saturday night, for fans of the harder stuff — ranging from alternative (Detroit Red, This American Song), metal (Sudden Frost, Slaughter in the Meridian), to punk rock (the Gabba Ghoulies, Submachine).

There will also be a instructional workshop center made possible by World of Music, a Story Walk courtesy of the Cambridge Springs Public Library, a Crazy Kid Monkey Zone with activities and inflatable rides, and a shuttle service provided by the Lake Erie Ale Trail to take festival-goers from place to place. A designated camping area (on a first-come-first-serve basis) will come in handy for those hoping to stay overnight. — Nick Warren

For full list of times and locations, visit cambridgespringsmusicfestival.com.