Great Blue Heron a Festival for the Generations

It's the music that keeps the Heron soaring 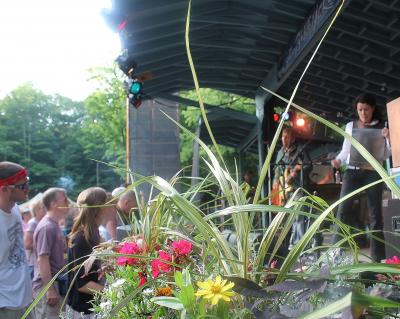 For a long time now (since I was, or just barely wasn't, a flanneled long-hair of the 90s, really) I've had a little multiplicity of friends drop a line — usually sometime around the Summer Solstice and year after year — to ask if they'll be seeing me at the Heron.

"Hope to!," they always say, and they mean it, too, because they know pretty much anyone who's ever been there and is going again can't wait to get back — and anyone who's not, well, they wish they were.

A good couple of handfuls of years have passed between those first and last lines dropped from long-ago college friends, and even longer-ago high school friends. We're all older, and some of us are now grayish flanneled long-hairs, and a lot of us have at least a rugrat or two in tow most of the time.

That takes me back to a sweet little moment years ago: "I've been right here for the last 20 years," an all-smiles guy named Bob Johnson told me, showing off his wife, his daughter, and his grandchild as they relaxed and jammed out in the same spot on the hill he told me he'd always (really — at that point, for the last 20 years) set his tribe up at.

"Just look out there. It's beautiful," he said, and he was right.

The family vibe is strong at the Heron. Really strong, and really real. And that's the way it's always been, and — at 28 years in and still going and growing beautifully on a big farm in the rolling foothills of New York's lush Southern Tier — it seems that's the way it'll be for some time.

That literally roots-deep connection to the festival grounds is a strong draw there and back, no doubt, but make no mistake: It's the music that keeps the Heron soaring.

"It really is my favorite festival — and [I've] been all over the place," singer and multi-instrumentalist Charity Nuse, a longtime Heron player, told me while we sat for a chat some years back. As performers, she said, "we have some of our best shows here," and it's because everyone is drawing from and giving to the shared energy unique to that space.

"It's an amazing experience," she said, and she was right, too. — Ryan Smith