Claire Boucher has moved from her darker, dream pop sound to something brighter and more marketable.

by Nick Warren
View ProfileTwitterInstagramRSS Feed
November 25, 2015 at 10:30 AM 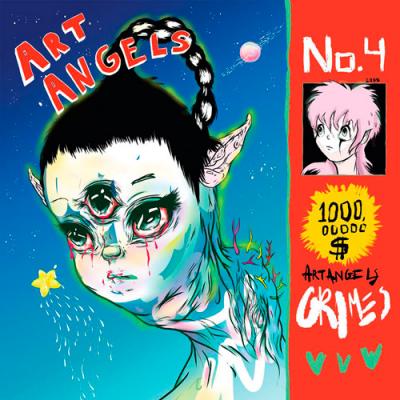 You might be surprised by how genuinely poppy Art Angels sounds. No one would describe the widely acclaimed 2012 bedroom album Visions as a mainstream sensation. Claire Boucher has moved from her darker, dream pop sound to something brighter and more marketable. Usually, an evolution like that would throw up red flags of insincerity. That isn't the case here, and that's why it works. I had my doubts, but around the sixth listen, the catchiness won out. At 28, the Canadian songwriter is poising herself as a true "post-internet" pop star. Boucher has described Grimes as "ADD music." That makes sense when you hear the millennial schmaltz of "California" followed by Taiwanese rapper Aristophanes' guest spot on "Scream." The first side of the album is front loaded with a string of club-ready cuts. The highlight of that later half is "Venus Fly," where she teams up with the venerable Janelle Monáe. After the dust settles, will we see Grimes be seated as Pitchfork's answer to Katy Perry? – Nick Warren