Something new percolating downtown at Ember+Forge 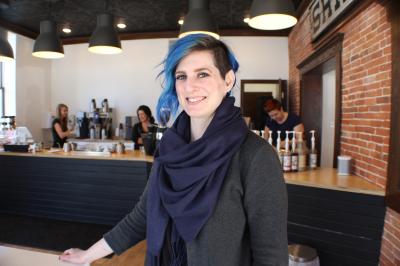 Nick Warren
Ember + Forge proprietor Hannah Kirby has been enjoying early success with her new coffee shop, thanks to a focused business plan and strong community interaction and support.

I have a dorky confession to make upfront: When my high school girlfriends and I were juniors and seniors, we didn't go out and party on the weekends. We weren't getting drunk, smoking things and making questionable choices while doing so. Weather permitting, we would get dressed up and visit Erie's coffee spots. Hey, we weren't old enough for bars yet, but Sarah had her Plymouth Sundance, and for five Edinboro gals with big-city dreams, Erie was as sophisticated as it was going to get until we split for college.

There was Aromas, in what is now Casablanca Grill on Eighth. There was ultra-posh 1000 French, which served espresso drinks in those huge, round mugs the size of your face. And then there was our absolute favorite coffee shop, Poe's, in close proximity to Forward Hall, in what is now the Independence Hill neighborhood on Peach. Seventeen years ago we guzzled cappuccinos and peppermint mochas and vanilla lattes, and we felt damn chic while doing it.

Now that I'm a freelance writer, grad student and parent, my perception of the glamorousness of drinking coffee has been taken down a notch since those halcyon days, but as a full-fledged inhabitant of the City of Erie, my appreciation for a locally owned coffee shop, with locally sourced beans — and some female bad-assery at the helm — has risen exponentially.

Enter Ember + Forge, the brainchild willed into existence by owner Hannah Kirby, whose appreciation for coffee shops led her from a career in engineering to owning and operating the downtown area's only independently run, dedicated java joint, which officially opened its doors in late December 2017. "[It] always inspired me, seeing people coming together over coffee," she explained.

Coffeehouses, as they were known, were popular in the Middle East in the early 1500s; Europeans, clearly impressed by both the concept and the beverage which gives the concept its name, took about 100 years to get around to copying the Persians, Egyptians and Turks, and facsimiles popped up all over the continent, beginning in Venice and spreading eastward. From the first, they were meeting places and social levelers, where men (and only occasionally women) could mingle regardless of social class or status, and trade information, political views and business propositions, or conversely, could just relax over a hot percolated beverage.

This rich history behind coffee shops, which has long brewed in the backdrop of Western culture, with coffeehouses of old often serving as silent witnesses to the men and women who stoked the dissent that toppled monarchical rule, is clearly not lost on Kirby, who told me she "…wanted to create a space for people to connect and share ideas over locally roasted coffee." Kirby hopes that the shop will "anchor our downtown" and "support the growth and investment of other companies." As it happens, Ember+Forge might not lead the Revolution so much as the Renaissance.

Clearly there is a strong local theme permeating all aspects of the coffee shop, starting with the manner in which Kirby and her team renovated the space, located at 401 State Street, and the way she has honored the building's former life in its present incarnation. According to the shop's website, "The building's history as a chandlery, a place where candles were made and sold forms the 'ember' in the shop's name, while 'forge' is a nod to the city's history in manufacturing."

A quality engineer at the LORD Corporation who for seven years performed tasks ranging from audits to working on the manufacturing floor, Kirby credits her background in engineering for training her in critical thinking, planning, efficiency and foresight, four qualities that would serve her well anywhere, but which give her an edge in both a city and a business which is prone to quick, flashy fireworks, followed by an even quicker fade-out (after all, none of those aforementioned coffee shops were still around when I moved into the City of Erie in 2012). And the downtown area, which is lively and vibrant, bolstered by great restaurant and bar locations and huge, thriving, well-populated business like Erie Insurance and UPMC Hamot, as well as foot traffic from Gannon students, by no means provides a shoo-in for small enterprises seeking to capitalize on the location.

Yet Kirby explained, "There are challenges to being in a downtown environment, but they are significantly outweighed by the benefits of being able to fully engage with our community and support development of our downtown in a big way."

Daunting as the process of opening a new business can be, Kirby has a dedicated team behind her, including her husband Sam and the support of the ATHENA Circle of Trust, a self-described "cohort of emerging female leaders who empower each other to develop executive and leadership skills and advocate for one another as leaders in the Erie community." She has also devised an admirable business plan for her shop, which includes a simple but high-quality menu with locally roasted coffee served up via single-brew methods (as well as cold brew, espresso beverages and loose-leaf teas), plus plenty of community interaction, whether it's through social media outreach or hosting events in the shop's bright, modern space.

"Social media has been a great tool —- especially when it came to building momentum before the official opening," Kirby told me. Indeed, fans of the shop voted in Ember+Forge as a nominee for the Reader's Best of Erie awards, under Best Local Coffee Shop — two months before Kirby even opened her doors.

If the present is any indication, the future of Ember+Forge is on the up-and-up, particularly as support from the community — and beyond — continues to roll in. Just last week, Kirby received recognition and acclaim for her work as a young, female entrepreneur contributing to the Erie community and its downtown area on American Public Media's Marketplace. In her remarks there, one statement was particularly telling in terms of Kirby's vision for the shop: "And what would make this dream absolutely set in stone would be that two people come in and talk about an idea, and come up with a plan inside these walls and then execute it outside of them, [and] that really helps our city grow."

Kirby and Co. plan to keep things fresh with an ever-changing line-up of events, including live music, a Yoga+Coffee series and participation in the next Gallery Night. When it comes to celebrating everything local, Kirby not only practices what she preaches, she plans, prioritizes and perfects — and keeps Erie's tradition of coffee shops alive, well, and wonderful for the next generation of java junkies, revolutionaries and wannabe sophisticates.

by Cara Suppa5/6/2021, 12:30 PM
Rescheduled speaker series streaming throughout month of May