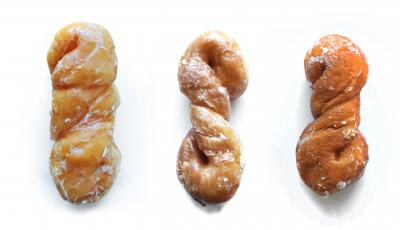 Nick Warren
You can't judge a donut by its cover - the glaze is just one component of what makes these three specimens delicious. Pictured from left to right are the Jack Frost, Mighty Fine, and H&K entries.

A mug of piping hot coffee and the glazed donut — the two were made for each other. While the glazed ring has been at the center of many engagements, the glazed twist's sleeker design is better suited to consummate the marriage. Luckily for us, Erie boasts three locally-owned shops that have presided over dozens upon dozens of such unions throughout the decades. As such, they know a good thing when they see it — the question now was would we know a good thing when we taste it?

The Erie Reader recently conducted a blind taste test at its State Street offices to determine the answer. Choosing our favorite iteration of the glazed twist was like choosing between supermodel doctor, supermodel lawyer, or supermodel entertainer (do you like your taste buds to be taken care of, argued for and persuaded, or made to feel good and sing along?), but the results were tabulated nonetheless.

Perhaps the least heralded of Erie's donut triumvirate, the Jack Frost glazed twist won us over with its soft, pillowy texture, subtle vanilla flavor, and all-enveloping honey-based glaze. The recipe survived three generations of the Frost family until being passed on to new ownership in Darlene Cohen, who has been gradually expanding distribution in her three years at the helm. Her clientele just so happens to include Ember + Forge, coffee and the glazed twist's new dream home (also check out the "donotti" — a donut-shaped reworking of biscotti).

The runners-up (barely) were:

The H & K glazed twist also pleased our palates with a somewhat chewier, breadier dough and coarser grain sugar glaze. The west side is well-represented with this Millcreek staple.

Most of us had never questioned Mighty Fine's dominance because it's never given us a reason to — it's always open and always delicious. Mighty Fine's famed glazed twist dissolves on the tongue almost like cotton candy.

Coffee offers plenty of perks on its own, but the fact that we get to eat donuts with them is the epitome of harmony.

by Matt Swanseger9/27/2021, 3:54 PM
Accolades abound for accomplishments in science and fiction