Don your costume and head to the King's Rook Club this Halloween for an extravaganza you won't want to miss.

by Alex Bieler
View ProfileFacebookTwitterInstagramGoogle+RSS Feed
October 29, 2014 at 6:30 AM 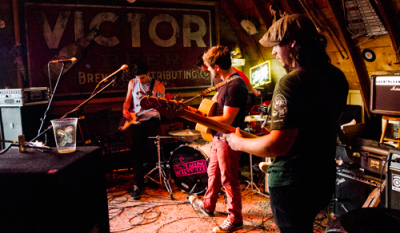 Local music fans are in for a serious treat this All Hallows' Eve when a pair of Best of Erie 2014 winners team up for a Halloween Extravaganza at Peach Street live-music haunt the King's Rook Club Friday.

The scary-good line up for the free holiday show includes BoE 2014 Best Up-and-Coming Band Falling Hollywood and the hippie-hop group The Lower Eastside Connection, whose Jonny Evans took home the award for Best MC. In addition to the high-quality tunes the bands normally provide, the holiday should provide an added layer of fun to the festivities, even for the musicians.

"I really like Halloween because people really have a tendency to step outside themselves and dress up and you get to play for a crowd that's almost otherworldly," Falling Hollywood bassist Bill Frackowiak says. "It's a fun experience and something you don't see every day."

Given the circumstances, you better get yourself dressed up for this rockin' Halloween occasion, with The LEC pumping out funky hip-hop grooves and Falling Hollywood ripping out killer Rust Belt jams. If that's not enough for you, Falling Hollywood may be offering up a special look at future tracks.

"Over the past week or so, we've been really pushing to show everyone a little piece of what's to come," Falling Hollywood drummer Brad Triana says of the potential for a sneak peek at some new material from the band.

Don't trick yourself into going somewhere else for your holiday festivities, because music lovers are in for a real treat at the Halloween Extravaganza.