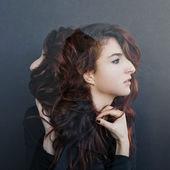 Hannah Georgas' third full-length album casts a dark, indie-pop shadow. For Evelyn is named after Georgas' grandmother. The record is a tonal departure from her previous pop work. It opens with the low harmonic rumble of two saxophones, provided by Joseph Shabason (The War on Drugs/Destroyer). Georgas asks "what if the best times are all up?" Virtually every lyric is penned under a pall of self-doubt and examination. Two songs on the album retain a lighter air – "Naked Beaches" and "Crazy S***" – echoing the apathetic cutesiness of her hit debut EP. The folksy acoustic guitar chimes of her earlier work are absent, in their place lie sweeping soundscapes and processed synth pads. Syncopated horn beats as in "Waste" start to craft something incredibly promising. You would never guess that this is the same singer who wrote a song for Wal-Mart in 2009 ("You've Got a Place Called Home," which paired with the megacorporation's back to school campaign). Like Feist's Apple spot and Ingrid Michaelson's Old Navy jingle, so go some artists. Regardless, the ethereal, emotionally tender moments of this album are the ones to remember most. – Nick Warren