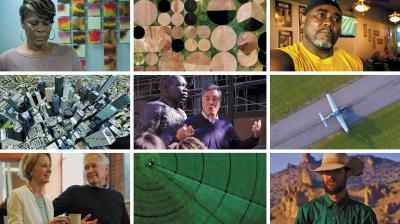 Like the book upon which it is based, "Our Towns," the new HBO documentary from Academy Award-nominated filmmakers Steven Ascher and Jeanne Jordan is uplifting without being pollyannish. The feature film captures the triumphs and trials of present-day America through the lenses of eight towns to reveal that the sum of our country's parts – when examined individually at their local levels – paints a brighter picture than what many may consider the narrative of the nation to be: Darker and more divisive than in modern-day memory. That film, based on the 2018 national bestseller of the same name by veteran writers and reporters James Fallows and Deborah Fallows, debuts on HBO at 9 p.m. Tuesday, April 13 and becomes available to stream on-demand afterward.

All too often when books become movies, those who've read the book watch with the comparative eye to judge where the film gets the book 'right' and where it falls short in its copy-paste-from-book-to-screen-contouring endeavor. Others, who've not read the book, may see the film as a shortcut to getting to the heart of the message.

The beauty of the "Our Towns" film is that rather than working to adapt the book to screen, translating one medium to another, Ascher and Jordan advance the Fallows' 'Our Towns' narrative while retaining the core themes and values that civic innovation is present at the local level with folks uniting in shared efforts to improve the future of their towns. To be clear, you won't have to had read the book to enjoy the film, but it certainly deepens the viewing experience and is still very much worth a read, which I reviewed here.

by Ben Speggen5/9/2018, 3:30 PM
James and Deborah Fallows capture a different, more resilient side of America

In a brief review of how we got from there to here, the 'Our Towns' saga began after the Fallows returned from reporting in China and James posted a seemingly simple request on his blog: Tell us the story of your town. More than eight years ago, a deluge of responses flooded their inbox, from short notes to longer essays. While the places varied, a common thread wove them together: Things are happening here, and you should come see how and why and by whom.

So after some planning, off to these cities and towns, the Fallows would go, notching 100,000 miles on their Cirrus SR22 single-engine plane after plotting out the beginnings of their travels in 2012 to their final flight for this project in 2017. Despite being journalists with an actual parachute aboard their aircraft, they wouldn't be parachute-journalists, dropping in to capture the from-the-diner story over coffee. Instead, they'd stick around for days at a time and would often going back for follow-up trips.

They released initial reports through the City Makers: American Futures project on The Atlantic's website. And in The Atlantic's March 2016 cover feature, James told the story of the emerging narrative of the two Americas – a perceived broken, battered country-going-to-hell above, and a while-things-might-be-bad-elsewhere-we're-in-a-renaissance-here below-in-our-town, which I wrote about in 2016 for the Erie Reader here.

Cities Have Become the New Laboratories of Success

What was emerging has had a profound impact on our collective understanding and telling of the American story, in revealing that U.S. Supreme Court Justice Louis Brandeis' popularized notion that 'states are the laboratories of democracy' not only holds true still today, it has reached downwards into the local levels. Despite being all too often dismissed as 'flyover country' or only spoken on the lips of the national media after a natural disaster has swept through or tragedy – like a mass shooting – these places are very much working on working on it. That is, they're making their own tomorrow without waiting on some federal cavalry to ride in and save their town from whatever challenges of yesterday remain present today.

The documentary, filmed before the pandemic, acknowledges the looming, global crisis of the day without letting it strangle the stories. The Fallows' voices guide the viewer through the cinematic experience without pre-pandemic storytelling becoming convoluted during a pandemic the world's still very much living through. The impact a public health crisis will have on communities working to gather people still remains unanswered, but its consideration isn't ignored here, as they explore the meat-packing industry in Sioux Falls, South Dakota, at one time a hotspot for Covid-19 outbreaks.

Too, the film doesn't shy away from probing the country's other crises. Viewers see how in Columbus, Mississippi, a community is wrestling with its past and its role in slavery years ago and racial tensions still evident today through educational efforts and new ways of thinking about the future economic development in the present. In South Dakota, the film observes the centuries-long legacy of the country's relationship to its indigenous people while also capturing the stories of its New American community.

In Charleston, West Virginia, the camera records the vestiges of the coal industry but also captures the creative spirit alive in the arts. And in Bend, Oregon, the final destination of the journey here, the film recounts the impact the timber industry and the pivots the community has been made since, becoming a destination location for remote workers before remote work swept the nation amidst the pandemic.

And there's so much more, from specific struggles – communities dealing with the opioid crisis; to the existential – have we become too big, attracted too many outsiders? All unfurled over more than 90-plus minutes of thoughtful interviews, panoramic sweeps, close-ups on Main Streets, that examine challenges, explore solutions, and leave the viewer thinking of the observation offered by Eastern Mississippi Community College's Raj Shaunak: "If it can happen here, surely the positive things are replicable elsewhere."

That is the attraction of the Ascher and Jordan's film here: Further on display, further up for review, further up for consideration the 'hey, we should try that in our town!' is the story that America remains in the hands of Americans, an ever-evolving, ever-growing group of people with many, like those showcased here, working on its faults and celebrating its splendor.

Premiering on HBO and HBO Max on Tuesday, April 13 // Directed by: Steven Ascher, Jeanne Jordan // Written by: James Fallows, Deborah Fallows, based on their book // 97 minutes

For the record, the author has a part-time paid role as an editor and contributor for the new Our Towns Civic Foundation. He also mentioned in the Acknowledgments of "Our Towns: A 100,000-Mile Journey into the Heart of America."