Here Come the Mummies came to the Eerie Horror Film Festival. Here come some photos of their freaky funkiness... 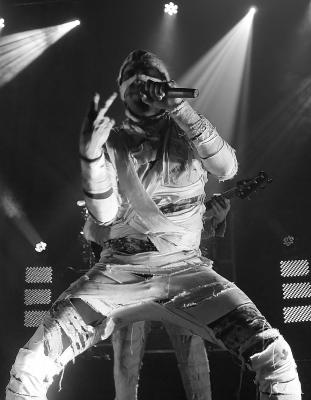 My first impression of the 2014 Eerie Horror Film Festival's spotlight musical performance -- beside that the band was fearsomely funky -- was that, for being all undead and stuff, they appear to have one helluva live-show fanbase.

Just beyond that first thought came this: Shooting these mummies is damn good fun.

So now, as part of my continuing-in-spurts (eck!) coverage of various Halloween-time happenings around the Gem City region, here come 13 ghastly ganders at Here Come the Mummies' Oct. 17 performance at the Warner Theater:

Know of somethin' spooky goin' down in the next coupla weeks? You can reach Reader writer/photographer Ryan Smith at rsmith@eriereader.com, or follow him on Twitter @ryansmithplens.