Ready Player One is a Smart, Fun Nostalgia Overload 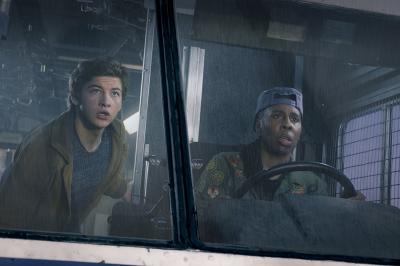 Steven Spielberg became a household name by producing and directing films whose imagery became iconic for entire generations of viewers. So it's natural that he directed Ready Player One; a movie that enthusiastically celebrates those same pop cultural artifacts.

Set in the year 2045, the film gives us a world ravaged by overpopulation and poverty. However, the people escape their dreary existence by immersing themselves in the Oasis, a virtual reality world where people can be or do anything they want. And apparently most people want to be popular fictional characters from the '80s, '90s and 2000s. But when the creator of the Oasis dies, a contest is created for a chance to win ownership of his creation and everyone jumps at that opportunity.

As I said before, the film celebrates nostalgia but it also smartly undercuts that celebration by showing the stultifying effects of living one's life devoted to pop culture. These characters live fantastic lives in the Oasis but their real lives are spent in isolation with huge corporations taking more and more of their freedoms away. It was a welcome decision for the movie to focus the climax less on the competition and more on a kind of citizens' uprising against the forces of greed and corruption. Sure it's all an escapist fantasy, but in this age when the Internet (our own Oasis) is at risk of falling into the hands of the corporate elite, watching the little guys fight back against oppression is the kind of escapism I think we all need right now. — Forest Taylor