Leave Me Alone is an impressive debut from Madrid's Hinds.

by Nick Warren
View ProfileTwitterInstagramRSS Feed
January 20, 2016 at 10:45 AM 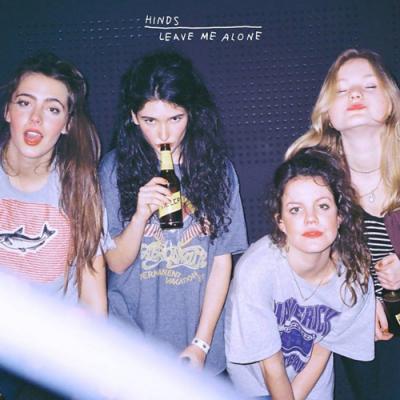 Leave Me Alone is an impressive debut from Madrid's Hinds. The four women of the group give us jangly echoes apt for repeated listens. The tone of the album embodies the upbeat, confident laziness of the best modern garage rockers. Fans of Chastity Belt or Mac Demarco will quickly get what they're about. Squishy reverb tinges every guitar lick as the rhythm section bangs out a steady, swayable beat. Vocals are shared brilliantly by guitarists Carlotta Cosials and Ana Perrote. Throughout the entire album, the two weave in and out of unison to form a charmingly distinct trademark. The duo started out on SoundCloud, covering bands like Madrid's Los Nastys and Burger Records' Dead Ghosts. Then known as Deers, the band changed their name due to legal pressure from The Dears. They didn't have to look far, switching out the name for a catchier four letter cervidae synonym. This, like everything the band does, was done with a smoky-eyed smile. Keep your ears open for this buzz-worthy quartet. – Nick Warren