Browsing the Internet Archive while quarantined can yield impressive results 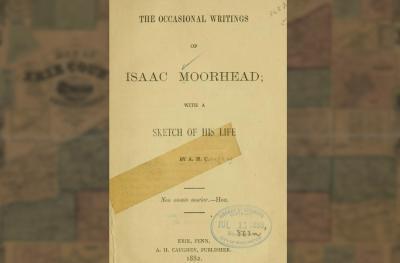 Even though we are all isolated in our homes for the foreseeable future, for those of us who research or write about history, the research may get a bit more challenging, but it doesn't have to stop. If you're merely interested in history, now would also be a great time to explore some primary sources, the backbone of historical research.

While we may not be able to get lost in our research at the library or dusty in the archives, the increase in digital archives over the past decade has made it easier than ever to history from home.

"Our mission is to provide Universal Access to All Knowledge," the site declares.

The digital archive is known by many for its Wayback Machine, which has been archiving snapshots of the web since 1996 (currently over 330 billion websites), but the non-profit also functions as a free digital library, archiving millions of books films, music, images, software, recorded audio, public television, and more.

If you enjoy sifting through the forgotten and unexplored, you can get lost on the Internet Archive for hours at a time.

For me, I enjoy looking through the digitally archived texts.

The sources of these free-to-access digitized texts, of which there are over a million, include contributions from well-known establishments such as the Library of Congress, New York Public Library, and Harvard University, but also includes various other organizations and institutions throughout the world.

Often in these old digitized books on the spider-webbed corners of the internet, I dust-off some digital files only to find some of the more interesting stories from our past. The origins of a previously forgotten story for our past can come from a variety of places: a snippet from an old newspaper, a long-lost book, a letter, a government document or a police record, even an old Erie cookbook.

Take Isaac Moorhead. He was a well-known Erie resident throughout the mid-1800s. He was a conductor on Erie's railroads. He owned a bookstore. He spent some time as a government clerk. At the time of his death on June 4, 1881, he was 53-years-old and living at 141 W. 7th Street (the current location of Gannon University's Zurn Science Center) with his wife, Caroline, and 17-year-old son, Maxwell. He was also working as the city's postmaster and was widely-known and liked throughout the city.

Andrew H. Caughey, a lifelong friend, and another prominent resident in Erie began collecting various writings and letters of Moorhead's at the suggestion of locals who knew him. He published them a year later into a book, only 300 copies meant for limited distribution around Erie: "The Occasional Writings of Isaac Moorhead; with a Sketch of His Life."

According to Caughey, Moorehead's writings were widely "remembered, both on account of their literary merit, and because they are laden with many important facts of local and general history."

The book begins with a short biography of Moorhead's written by Caughey.

"Possibly no active man has ever taken leave of the world and its busy affairs of whom it could be said with truth that he left no an enemy behind," he wrote. "But if ever there was on [sic] who had been a positive, straightforward, active man among men for the greater part of half a century, of whom it could be said at the close of his career that he had no enemies, that man was Isaac Moorhead."

He described how Moorhead's death "felt as a personal grief and loss" to thousands and then spent many pages describing his life from childhood through his many careers as an adult.

During the Erie Gauge Wars that rattled our corner of the state, Moorhead was employed as a train conductor. Caughey praised his cool demeanor and how he did his job "in the midst of a hostile population" and did so "calmly, resolutely and in a way not calculated to excite and exasperate."

Then, the book dives into the writings of Moorhead himself: his travels by train, his visit to Gettsyburg only one year after the Civil War battle took place, tracing the steps of Colonel Strong Vincent, seeing the bones and boots of soldiers still on the battlefield.

"How can I describe the place of the last desperate charge of the enemy," he wrote. "There they went down like dry grass before fire."

One section of the book is titled "Old Times in Erie." Here, Moorhead describes in detail Erie during his childhood, including chapters dedicated to Peach, State, and French streets.

"The cheerful and pleasant sound of bells fell upon our ears, and, looking towards Federal Hill, we noticed one of those immense Conestoga wagons, bow-topped and covered with canvas, drawn by six horses, coming leisure [sic] down the street," he wrote, describing a time that he and his friend Paul were returning from a fishing trip of a Mill Creek tributary.

In each passage, he explained in detail the places he would pass on his walks — McNair Brewery, Flynt's Mill-Dam, Laird's Tavern, and so on, each place having its own story, a forgotten place in our collective history — and the people who populated each part of town, some familiar to us today, others not. "[H]e stands in a long linen coat with broad lapels [sic], his thumb in waist-coat, a Leghorn hat bent down in front and covering one eye," he wrote of an important Erie figure. "This is Andrew Scott, the Sheriff."

Oftentimes, Moorhead leaves readers with little more than that and — in my case, at least — a newly piqued curiosity about another figure in Erie's history. Just who was this mysterious Sheriff?

In one of the final chapters, he described his childhood schooling. He wrote of the teachers, his classmates, some troublemaking, and his very serious principal.

"Principal Stewart's discipline was of the most thorough nature," he wrote. "A thorough Latin scholar himself, he could not for an instant tolerate an imperfect lesson, and when it was the result of idleness or inattention, he was swift and merciless in his punishment. The hoarse 'swish' of that fearful strap, as it descended on some lazy blunderer's back, used to symbolize to my terrified imagination the horrors of the knout."

Reading Moorhead's accounts feels almost like stepping back into time -- and you don't have to be a historian or even leave your couch to read it or other similar obscure books from the past.

The Library of Congress initially added The Occasional Writings of Isaac Moorhead into their archives in 1883. In 2008, they digitized the entire book cover to cover and contributed it to the Internet Archive. There, one can examine the entire book in their browser with a search feature and zoom features, or it can be downloaded in various formats, such as PDF, EPUB, or for the Kindle.

I can't say for sure, but of the millions of books digitized on the Internet Archive, I can't imagine too many people have read through the writings of Isaac Moorhead. There is something thrilling about the experience, just as it is in physical archives, reading these words put to paper so many years ago — stories largely forgotten by time.