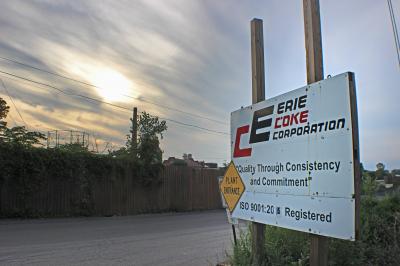 At this writing, Environmental Hearing Board Judge Steven C. Beckman is weighing Erie Coke's case against being shut down, despite numerous violations of its Title V operating permit — even three more during the July hearing.

On Monday, Aug. 12, Beckman filed an order "denying Erie Coke's petition to reopen the record to include additional evidence in the case that the company did not bring up at the hearing," according to Group Against Smog and Pollution (GASP). "The order also grants the Department of Environmental Protection (DEP) request to strike references to that evidence in Erie Coke's post-hearing brief."

Meanwhile, DEP attorneys have filed arguments supporting closing the plant permanently. GASP highlighted several of DEP attorneys' key points in an Aug. 9 blog post, concluding that "the facts when viewed in their totality demonstrate that Erie Coke chronically and systematically fails to comply with the law. For years, these violations have subjected the environment and residents of the city of Erie to ongoing emissions of particulate matter and coke oven gas — a hazardous air pollutant — and Erie Coke's own witnesses testified there is no end in sight."

The Erie Times-News quoted Erie Coke's lawyers, who wrote in their last-minute post-hearing brief that a shutdown "would be tragic."

Despite the indisputably sad reality that Erie Coke employees would be out of work, the word "tragic" used in this context feels tone-deaf, even when factoring in economic ripple effects to which the company's lawyers also refer.

What comes closer to an actual tragedy is the way that Erie Coke has been permitted to pollute our city for so many years, risking the health of Erie's people and environment, seemingly with little regard for either.

"There can be no question that citizens' rights to 'clean air' and 'to the preservation of natural scenic, historic and esthetic values of the environment' are implicated by the continuing emissions of particulate matter and coke oven gas from the Erie Coke facility," DEP attorneys wrote. "Its location on the shore of Lake Erie and adjacent Presque Isle State Park makes these infringements even more egregious."

Along similar lines, in his Aug. 4 column in the Erie Times-News, Pat Howard referred to Erie's comprehensive plan, Erie Refocused, which "identifies maximizing the potential of the bayfront and connecting it to downtown Erie as essential to this community's turnaround. In a letter he delivered with the plan, Charles Buki didn't mince words," wrote Howard.

"'If there is a more squandered asset in America than the city of Erie's shoreline, it is hard to imagine. ... If the city of Erie is to have a second act, optimizing the bayfront for its cultural and recreational value, its real estate value, and its iconic value, needs to happen,' Buki wrote."

None of this is to say that business and industry have no reasonable claim on Erie's bayfront. But it's hard to see how a corporation like Erie Coke, which only seems committed to appearing compliant when it's threatened with closure, can contribute to anything other than perpetuating the squandering of our shoreline — and thus our economic future.

Frakt adds, "A study found that higher concentrations of fine particulate matter depressed the productivity of pear packers in Northern California. In another study, the same authors found that when pollution was higher, Chinese call center workers took more breaks."

"Over the very long term, economic growth has been a boon to health and longevity," he summarizes. "But when that growth is achieved through increased pollution, that can harm both health as well as longer-term economic prospects."

At one point as I was writing this, I realized I had a slew of tabs open to other articles and studies linking pollution to negative economic impacts, some presenting evidence that the presence of polluting industries lowers real estate values — no surprise there. I'd intended to cite more of them — but then was struck again with a familiar sense that more statistics are not necessarily the answer. It seems our current predicament is not primarily due to a dearth of data, but rather a failure of imagination.

As we've noted before, a significant part of Erie — including the area near Erie Coke — has been designated an Environmental Justice community by our DEP. And as we've seen, the impacts of pollution aren't limited to breathing difficulties. They can hinder a person's long-term earning potential. They can keep future investors from locating here. They can ruin quality of life.

During the hearing in July, some residents who live near Erie Coke testified about the black soot they've had to clean off their homes, the windows they've had to keep closed. On one recent perfect summer day, I received a message from an eastside homeowner who'd planned to enjoy that gorgeous Sunday by walking her dog, but the smell from Erie Coke was intolerable.

These are people who invested in Erie. Why should protecting their assets be less of a priority than protecting Erie Coke's?

In the debate about whether or not to let a polluting company continue to operate, if all we're counting is money, we need a new economic model. And if the only neighbors we're concerned about are the ones who live next door, we need a wider sense of community — one that even includes those we'll never know.

In their book Active Hope, Joanna Macy and Chris Johnstone propose writing a letter to the future, imagining we're answering questions from those who will inherit the city we now call home.

"Ancestor, I hear stories about the period you are living in … with some people absurdly rich while huge numbers are starving and homeless, poisons in the seas and soil and air … We're still experiencing the effects of all that. How much of this do you know about? And what is it like for you to live with this knowledge?"

This exercise may feel a bit corny. But it does widen our perception of community to include those who will live in Erie long after we're gone. Or even those who'd love to set up shop here, creating unforeseen opportunities for our region.

If we myopically focus on what might be lost if one polluting corporation is forced to shut down, we may block the vision to see what else is possible. This is not about looking to other cities' models of progress and then laminating their identities onto Erie. This is about peeling back layers of stale thinking and limited imagination to reveal the riches we already have: breathtaking natural beauty and a self-respecting community where people care for each other.

That's the sort of currency we should be counting. If we are to thrive, it will take standing up for what we value most, thereby clarifying every day that we are choosing a just, livable, vibrant Erie for all.

Of course, Erie Coke should expect a fair weighing of reasonable evidence as decisions are made regarding the plant's future. Though the past nine years of violations since the 2010 DEP consent decree suggest otherwise, is it possible the company could transform into the "good neighbor" we deserve?

DEP's attorneys seem skeptical of that outcome, according to GASP: "DEP attorneys also argued that the company lacks the proper finances to bring the plant — and keep it — in compliance with its permit. It noted that Erie Coke has no capital improvement plan or training budget."

The department's attorneys also emphasized that Erie Coke has no money set aside for a backup hydrogen sulfide absorber, which is required for them to legally operate under their Title V permit.

Erie Coke keeps arguing that it is on track to clean up its act.

But as a community, we probably shouldn't hold our breath.

Lights Out at the Lighthouse

by Jonathan Burdick9/28/2021, 12:05 PM
Nick Sorensen's Buddycast builds both their guestlist and their fundraising outreach