In Support of the Scene

Hear that? It's the words of Michael Bennett's new series. If you're looking reviews and previews of the happenings around Erie, then you've come to the right place. 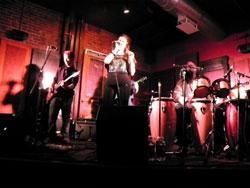 Erie is full of talented musicians. Great bands, singer-songwriters, and creative minds engendering emotion and awareness through the prism of music in order to fulfill an inborn need to release their inner souls. It is an open and welcoming community, and every week there are a number of shows you should be seeing and should not have missed or else you'll suffer from a pit in your heart ruled by disappointment. All of these are possible, but there is music to be heard, and you should take full advantage of the fact that regardless of what anyone says about Erie, the music is entwined in the fabric of our fair city and should be acknowledged.

It was like old home week. With the start of the gluttonous holiday season, people returned from near and far to enjoy friends and family or at least remind themselves why they left. This was especially true for musicians.

The Tradesmen are a great local band. Killer on every level. Punk sounds with Celtic overtones and an energy that never dwindles, no matter how the crowd reacts. Even though they are a local band, they travel for most of their sets. Just a couple of weeks ago they played in North Carolina, but home beckoned and they returned with a vengeance.

First stop was The crooked i to open up for Continental, the new band by former Dropkick Murphy's member Rick Barton. The Tradesmen ruled the night. Their opening set was incredible. The crowd was small—it was a Tuesday night after all—but they were enthusiastic and allowed themselves to be rocked hard.

Continental was a different story. Barton, his son, Stephen, and two other members plodded through a set of peaks and valleys. The initial spark of seeing him on stage quickly turned to questioning glances when songs ended and the singer spoke. He talked of how great it was to be touring in a van and sleeping on floors and living the garage band experience, which was cool. But he also talked about his 20 years as a junkie alcoholic and set a mood over the crowd that hung like fog. It is the power of performance to be able to control a crowd, and on this night, Barton brought the whole thing down.

But the Tradesmen were triumphant and took their time home as a chance to play shows. That Friday they set up shop at Basement Transmissions for a great all-ages punk show. Susan, Be Anthony, Mala Sangre, and My Three Scum were there. Along with Olympus Mons out of Jamestown. Their set was a great display of punk hardcore infused with style and understanding.

The Tradesmen had one final stop, playing a show at the Art Annex that Saturday. They had the opportunity to rock out in front of Edinboro art students before Mystic Flotation Device took the stage. If you haven't seen MFD, and judging by the crowd that night you didn't, you are missing a musical treat. Improvisational psychedelic rock with no limits or boundaries. As long as they have a drummer, everything is cool.

If you are looking for a great psychedelic experience you would be foolish not to check out the return of the Waterband to The crooked i Friday, Dec. 9. Mainstays of the summer festival circuit, Waterband are a good-time jam band that make you wanna move your feet, your shoeless feet. And wear tie-dye. And patchouli. But their positive message and great sound will keep your body moving.

As it was old home week, one of the true giants of the Erie music scene was back in town to bring the noise, the funk, the soul and the good spirits. Preach Freedom has always been part of great bands, whether he is just lucky or has a soul that shapes the music around him is anybody's guess. I'd prefer to think it's more the latter.
He took to the stage at The crooked i on two separate occasions, with two separate bands, and both nights were moments in music not to have been missed.

Friday, Nov. 19 saw him on stage with Chocolate Starfish. A phantastic display of rock 'n' soul. Followed a week–and-a-day later by an inspired performance of One World Tribe. The house was packed and the vibe was all encompassing goodness. Seeing Tribe play again on an Erie stage was just another reminder of how great the talent in this town is, a true breeding ground for great musicians.

Also home for the holidays was Lindsay Vendetti for a set at The Vermont Tavern. Backed by an incredible band, her powerful voice was on display. But the power of her voice and the strong musicianship seemed tempered. At points it crossed over from music as passion to playing as work. But the crowd was supportive and it might just be the musical snobbery of this humble critic, but my soul was not stirred.

Speaking of not being stirred… If you've never run around a pool, smoked a cigarette, or had hot, sweaty, unprotected sex with a beautiful stranger have I got a band for you. Sirsy is coming back to The Vermont Tavern on Friday, Dec. 9. They play all kinds of covers that are safe and easily accessible to anyone that listens to the same bland songs on the rock stations and can't wait for the next episode of "Big Bang Theory." It's not so much an indictment as you might think. If you are the kind of person who would go home early from a show and post on Facebook that you saw a band, at a bar and all of your "friends" would remark how cool you were for braving downtown this is the show for your timid soul.

If your soul has more to it than what the world wants you to believe, you best have a good excuse for missing a couple of great shows over the last musical cycle.

The Jargonauts played another great set at The Beer Mug. Dare I say musical genius in Erie? I do dare. Do not miss this band, ever.

The holiday break also saw the return of Falling Hollywood. Tight harmonies, positive sounds, and lyrics you wish you had written define this group. Their set at The crooked i was an absolute delight. They are almost ready to head back into the studio and record their first full-length album.

As local albums go, your local record collection was not complete this year without the debut LP from Shotgun Jubilee. The band is so tight after returning to their original line-up, the shows get better every time. It has been nearly two months since the last Shotgun show, so they've probably practiced two times since then and are ready to deliver a great show.

"We've been workshopping a handful of new original songs throughout September and October, and we're excited to play them live," said bassist Ryan Bartosek. "They're a big chunk of what will be making up our next album so it'll be great to see how the crowd responds."

Shotgun will be opening up for Smackdab Saturday, Dec. 3 at The crooked i. If you missed this Jamestown band when they came through in September, make a point to catch them this time. They have a funky jam style that makes you want to dance, a perfect pairing for the jamtastic style of Shotgun. Even with Shotgun taking the opening slot, make no mistake; this is a double-headliner bill that will keep you dancing all night long.

"Playing opening slots on our main stomping grounds is a really positive thing for us in several ways. For one, when it's a nationally touring act, it's a great chance to showcase your best material in front of an audience who might only be there to see the headlining band and would otherwise not have seen you perform," Bartosek continued. "Also, it keeps you humble. As much as we may play out in town, we're still not above paying our dues. In this particular situation, we've known Smackdab for a long time and have a relationship with them. We thought it would be fun to join them for a night and it also might help draw even more people to the show."

Erie is rich in music. As the pressures of the holidays mount and seasonal affective disorder starts to grip the lakeside dwellers, there is no better cure than seeing a great band to take away your ills and rock your sublime soul back to the place where the sun is shinning and all is right with the world.