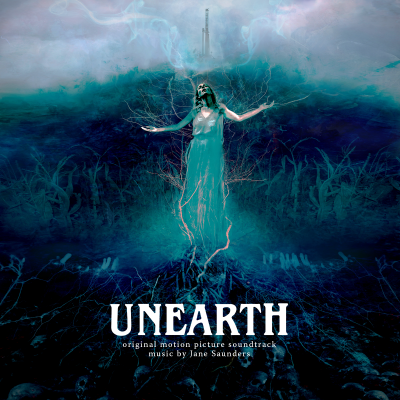 Four and a quarter stars out of five

While it's certainly no accident that Jane Saunders' soundtrack to the film Unearth sounds the way it does, perhaps it's no coincidence too that the soundtrack to Unearth looks like it would be a great Doom Metal record. With its modified Benguiat font (Stranger Things) and gorgeously evocative movie poster depicting star Allison McAtee with her arms outstretched, enveloped by roots that bleed to lightning and storm clouds, maybe it's also the dynamic lighting or the actress's well-defined cheekbones, but her face reminds me of equal parts crucifixion and equal parts Converge's iconic Jane Doe cover image. Inside, the comparisons don't end, with Jane Saunders' spartan score sounding like Sunn O))) minus the fuzz pedals, or – for the sake of titular cohesion, a more laconic Earth (while similarities to the metalcore band Unearth are virtually nonexistent).

While viewed in the film itself (directed by John C. Lyons and Dorota Swies), the soundtrack, along with the foley work and overall sound design prove to be one of the most impactful parts of the viewing experience. When watched, the music almost goes unnoticed, slowly creating ambient moods and an overall feeling of mounting tension for the characters in this self-proclaimed "fracking horror story." Unto itself, it's a keenly listenable backdrop filled with low rumbles and metallic shifts (metallic in the literal sense, not the genre). Soundtrack fans will want to seek this one out immediately (personally, this will certainly go into my curated playlist filled with instrumental albums to put on specifically while working). With 23 tracks of varying lengths, from the nine-second sting of "I'm Not a Teenager Anymore" to the six-and-a-half-minute sonic sculpture of "Missing," the album bleeds into itself, a gracious, gaseous groundswell in just over 48 minutes.

Listening to one of Saunders' previous projects, The Greatest Fear, draws a thread between Unearth's academic scoring process and the experimental metal DNA that it hints at. This is particularly at work in their 2019 effort, These Words Are a Vessel (and lesser so in 2005's The Coronation of the Locust Queen). Let there be no confusion, as well, with the other Jane Saunders, who happens to be a light-hearted, Christian folk singer.

Comparisons aside, Jane Saunders was able to translate the movie's actual themes of fracking and seismic activity into an aural interpretation. While at the SUNY Purchase Conservatory of Music, she was "working on auditory simulations and sound sonifications of earthquake activity triggered by shale gas drilling." Anyone familiar with the elevator pitch to Unearth will want to know what this sounds like, and anyone who has seen the movie will likely want to take a second look. Saunders continued, explaining that 'this work lead to perceptualizing fracking earthquake activity data for a Virtual Reality art installation collaboration with an amazing group of programmers and data architects at the Staten Island Makerspace for The New York City Electroacoustic Festival (Abrons Arts Center), as well as the World Maker Faire at the New York Hall Of Science."