There's a brainstorm about to sweep over Erie. The Jefferson Educational Society hosts the Third Global Summit from November 8 to 11. 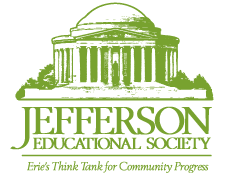 The Jefferson Educational Society kicks off its Global Summit III Tuesday, Nov. 8. "The Jefferson is proud to have been the force to galvanize the intellectual appetite of the citizens of Erie into such a superior event," said Christine Riehl, who has served as the Summit Chairwoman for all of the Summit events. Riehl said the goal of the Summit is "to provide a forum for public policy discussion, especially concerning Erie. It is also trying to fill the intellectual appetite of the citizens of Erie County." The Global Summit will run through Friday, Nov. 11.

Riehl, who first suggested this series, had in mind, "something like the Aspen Institute or a TED conference. We wanted a m?lange of speakers on a variety of topics but the central idea is to be looking to the future rather than the past or the present.We remain convinced that there is an intellectual appetite in Erie, Pa. and that the citizens of Erie deserve and are responsive to the Summit."

Riehl said that it is a tedious process to gather speakers for this event. "We toss around many names, contact their agencies, decide on a budget and what speakers we can accommodate," she explained. Countless different people are contacted for their suggestions regarding who should be brought to the conference. "Often the suggestions come from Dr. Garvey, President of the Jefferson, Dr. David Kozac from Gannon and President of the Jefferson Board of Directors, or any of us involved with the JES," said Riehl.

The premiere educational event in the tri-state region, this year's Summit promises to be even bigger and better than in the past. "We are barely three years old—both the Jefferson itself and the Summit—and our growth and reception have been dazzling," said Riehl. "The structural growth has been from five presentations to six and now to seven. And while the speakers the first year were excellent and intellectually challenging and fulfilling, and the second year included world renowned scholars, the line-up of speakers this year will be mind-boggling." Riehl later added, "we reach out to historians, futurists, medical and health professionals, journalists, and big thinkers.  We try not to have two speakers from the same area."

The first day of the event will begin with Dr. Francis Fukuyama—a must-attend presentation.. Fukuyama is best known for his bestselling modern classic "The End of History." Fukuyama also is the senior fellow at the Center on Democracy, Development and the Rule of Law at Stanford University, and will be speaking about "the End of History: Revisited."

The Summit continues the following day with Dr. Freddie Fu from the UPMC Medical Center in Pittsburgh. Fu is known worldwide for his pioneering surgical techniques and research and will speak during the day's luncheon on "Future Treatments in Sports Medicine for American Wellness."

Wednesday's evening speaker will be Steve Scully, a proud Erie native and the recipient of the first Thomas B. Hagen Dignitas Award. Scully is the Senior Executive Producer and Political Editor at CSPAN.  Scully will speak about "The Road to the White House: How Technology Has Shaped the Campaign Message."

General Michael Hayden, a retired U.S. Air Force Four-Star General and former Director of the NSA and CIA, will speak during the Thursday, Nov. 10 luncheon. Hayden will speak on "The Great Challenges of Preserving American Freedoms against 'No Rules' Terrorists." That same evening, Attorney Michael Songer, who teaches Law at Georgetown University and has practiced law for over 20 years, will lecture about "Blogs, Social Media and Wiki Leaks: The First Amendment and the Internet."

Bringing the event to a close on Friday, Nov. 11, Dr. Joel Barker will discuss "Exploring the Underused Territory of New Ideas." Dr. Alice Rivlin, who has taught at numerous universities, worked as former Director of the Congressional Budget Office, and serves as the current Director of the Brookings Institute, will wrap up the Summit on Friday evening by speaking on "Real Solutions for Reducing the National Deficit."

Make sure you stop in for one, or perhaps all of the days of the Global Summit III to take part in what Riehl calls "the 'brainstorm' which is about to break over Erie." Regarding The JES Global Summit, Riehl is excited to announce that "the plans are already in the works for next year."

The Jefferson Education Society is located at 3207 State St. For a full listing of events and times, visit JESerie.org or call 459.8000.

by Courtney McGraw5/4/2012, 1:03 PM
El Canelos Restaurant will be holding a weekend-long Cinco De Mayo celebration that you won't want to miss!

You Ought to Know: Lena Logvina

by Courtney McGraw4/19/2012, 10:49 AM
While some people like blending into the crowd, others are always looking for ways to stand out and make a distinction. The later is exactly what Lena Logvina has in mind when creating pieces for her jewelry line.

Results of the ?Betcha Can?t? Challenge

by Courtney McGraw2/21/2012, 11:22 AM
Find out all the juicy details of what went down between Alex Bieler and the "Betcha Can't" Challenge.

by Courtney McGraw1/26/2012, 2:12 PM
Looking for something to do February 2 that involves the likes of classical music and Radiohead? Then check this out