You Ought to Know: Lena Logvina

While some people like blending into the crowd, others are always looking for ways to stand out and make a distinction. The later is exactly what Lena Logvina has in mind when creating pieces for her jewelry line. 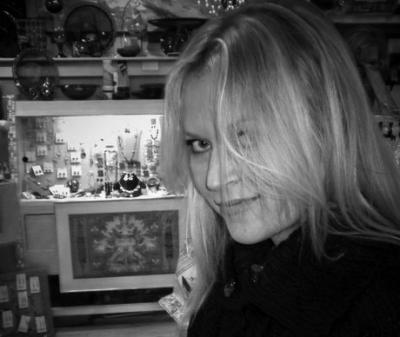 While some people like blending into the crowd, others are always looking for ways to stand out and make a distinction. The later is exactly what Lena Logvina has in mind when creating pieces for her jewelry line.

"Each of my pieces is unique," Logvina says in her alluring Ukrainian accent. "You can see 'me' in each of my pieces, but no two pieces are the same. I don't stick to one style; my work has evolved." Logvina, whose creations are as vibrant as her long, flowing, red hair, describes her perfect customer as someone who "likes to stand out and doesn't like mass-produced things," doesn't only give rise to jewelry. The Ukrainian artist also creates sculptures, paintings, and mixed-media pieces.

The most common elements that appear in her work are guitar and bass strings. "I have a musician at home, so I have an abundance of strings," says Logvina, who is married to Is What It Is musician Stephen Trohoske. "When you start with the guitar strings, you never know where you'll end up," she adds. "They have a mind of their own." She also enjoys working with wire—copper and silver wire to be exact.  When asked what her workplace looks like, the passionate businesswoman lets out a sigh and looks across the table at her husband who is shaking his head and grinning. "Well, it's everywhere," Logvina confesses. Having children, she admits, "I have to move wherever they move."

Family is a very important aspect to the couple. "I'm inspired by life, but I have my own inspiration in him and my kids," Logvina says, while lovingly staring across the table at her husband. Her mother, who is also a jewelry designer, tried several times to get Logvina into jewelry-making. Logvina shares that after having kids, she started getting into arts again by doing small crafts with her children. Once the crafts were finished, Logvina found herself creating jewelry and other pieces of art with the leftover craft materials. "I would borrow jewels from my mother. That's how it all started out. Now there's jewels everywhere," she says with a laugh. Logvina doesn't ever seem to stop. "I'll make something while I'm playing with the kids," she shares. "I don't go somewhere and lock myself in the room where nobody sees me. Oh no. I'm walking around, dancing with my child, jumping, you know." In fact, family is so important to Logvina, that she says the best part of her job is being at home and getting to work with her husband while being surrounded by family.

Logvina also finds inspiration in women. "I'm just inspired by women in general," she says. "I don't have a certain age or a certain whatever in mind. No. Everybody—I make it for everybody." She goes on to explain that all women are beautiful to begin with and that jewelry is a form of an art supply that can be used to decorate the female canvas. "I'm actually working on a new piece inspired by a woman's body," Logvina adds. The new piece will be comprised of pieces from an actual violin, as well as other various materials. She also would like to help women by eventually creating a bridal line. She shares that she wishes to start "a very whimsical, beautiful bridal line. You know—something special, something one of a kind for a once in a lifetime event." Brides aren't the only women she wants to create jewelry for. "I want my bracelets to be able to be worn with jeans and a T-shirt," she says while proudly displaying the yellow-orange bead and wire piece that sits on her delicate wrist. "At the same time, imagine wearing this with a cocktail dress. Either way, it is beautiful to me. It will go all day and you don't have to worry about it because it's something you can always wear." Trohoske, with a warm laugh, adds that each piece is unique, so you don't have to worry about someone showing up with the same thing that you are wearing. It is refreshing to meet a designer who is so proud of her creations that she dons them herself. Logvina truly does stand behind her work.

"I find inspiration in my memories from where I grew up," she shares. Logvina, who has been creative her entire life, moved from Kiev, Ukraine to Erie in order to be with family already here. Upon arrival, she knew no English, so she took classes and became fluent. She then went on to receive training to become a medical assistant. But even more amazing is that she started the company on her own and with no help from banks or loans. Today, her business is very successful. Logvina still remembers her childhood and draws a lot of inspiration from nature and the time she spent in Kiev, the capital and largest city in Ukraine, and an important industrial, scientific, educational, and cultural center of Eastern Europe. "Nature there has always been very colorful," she shares. "Inspiration comes from my memories with bright colors, a lot of pearls, just happy, very free." She captures Kiev's woody hills, ravines, and winding rivers perfectly in her work, giving audiences a glimpse of her early years in Ukraine.

While in college, Logvina dabbled in makeup and became a manager for a cosmetics line. "I absolutely loved doing makeovers," Logvina says. "I think I put what I learned in school along with makeup artistry and working as a manager and after that, I kind of went into jewelry and now I'm managing my own business." Her business has been a huge success. In fact, her business is been doing so well that her online Etsy shop is empty and Logvina is trying to fill it up again. Logvina's jewelry is sold locally in places such as the Tom Ridge Environmental Center and Glass Growers Gallery, as well as nationally and internationally. "We tour and go around to a lot of different art shows too," adds Logvina. Her jewelry has reached all over the United States, as well as Paris, Greece and Moscow.

If Logvina wasn't creating art and running her own business, she shares that she would "probably be going crazy." It almost seems as if it is impossible for her to stop designing. "I just can't stop," Logvina says. "Something woke up inside me and there was something that I just had to get out. I found jewelry to be my way." If Logvina wasn't creating jewelry, she would want to do illustrations for cartoons. This idea came about because of her love for 1940s and 1950s Russian animation. "It was beautiful and then kind of started to go away, so I wanted to bring it back." The fantasy elements from Russian animation can be seen in Logvina's spiraling jewelry, as well as her dream-like sculptures and imaginative paintings. Upon being asked what three words would sum up her work, Logvina responds with "unusual, free-flowing, and fantasy." The element of fantasy can greatly be seen in her multi-media piece, which depicts an illustration of one of Logvina's favorite childhood poems. "In that piece, you will see mermaids, you will see knights—so a lot of my inspiration is drawn from Russian folklore," she says. Logvina worked on the multi-media piece for two weeks straight in order to meet the contest deadline. "I did not stop," she adds.  The piece includes everything from the placing of individual Swarovski crystals and turquoise stones to countless sculptures actually being molded and mounted onto the canvas.

Another piece of Logvina's, called The Seven Circles of Life, will be at the upcoming art show on April 21 at Glass Growers Gallery, where you can also check out Logvina's jewelry and sculpture collections.

At this upcoming event, there will be a great opportunity to help out the community as well. "I made a piece and donated it to Kanzius Cancer Research Foundation and that piece actually made it into the contest and got into the finals," Logvina shares enthusiastically about the necklace made of seven different guitar and bass strings. "I finally got my piece back and we're going to start a promotion where people can donate  $5 and their names will go into a drawing. That will run for the next three months and be at Glass Growers." The April 21 show at Glass Growers will be your first chance to donate and have your name entered into the drawing. One name will be drawn after the 3-month long promotion and that winner will receive The Seven Circles of Life necklace. Logvina adds that she's hopeful people will make donations since all proceeds will go to the Kanzius Foundation, as she looks forward to the day when a cure will be found without any negative side effects.

This isn't the only show that will benefit the community. Logvina has a brunch/show April 21 that will benefit Alzheimer's research. Logvina's shows will provide a perfect chance for you to pick up some of your very own unique pieces of jewelry from her collections. Then you too will stand out in the crowd by flaunting her exquisite craftsmanship.

Lena Logvina will present her Tales of Kiev Collection on Saturday, April 21 from 7 to 9:30 p.m. at Glass Growers Gallery, 10 E. Fifth St.

by Courtney McGraw5/4/2012, 1:03 PM
El Canelos Restaurant will be holding a weekend-long Cinco De Mayo celebration that you won't want to miss!

Results of the ?Betcha Can?t? Challenge

by Courtney McGraw2/21/2012, 11:22 AM
Find out all the juicy details of what went down between Alex Bieler and the "Betcha Can't" Challenge.

by Courtney McGraw1/26/2012, 2:12 PM
Looking for something to do February 2 that involves the likes of classical music and Radiohead? Then check this out

by Courtney McGraw11/3/2011, 9:00 AM
There's a brainstorm about to sweep over Erie. The Jefferson Educational Society hosts the Third Global Summit from November 8 to 11.