Good Will Hunting is ?wicked smart.? How do you like them apple? 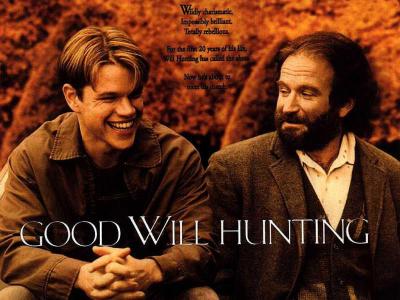 Check out the trailer: http://www.youtube.com/watch?v=z02M3NRtkAA

It's weird.  I had never seen "Good Will Hunting" before today, but I felt like I had seen it many times before.  It has been referenced numerous times in two of my favorite works, "It's Always Sunny in Philadelphia" and "Jay and Silent Bob Strike Back." Undoubtedly, we have all witnessed an acquaintance drop the classic line, "How do you like them apples?"

I can't recall how many times I have been told that I have to see "Good Will Hunting."  The film has been hyped up so much for me that I almost knew there was little chance it could live up to the abundance of high praise it has received.  Having felt like I'd already seen "Good Will Hunting" without ever actually watching it, I decided it was time to see if all of the positive reviews were right.  They were.

"Good Will Hunting" is both a fantastic film and an inspiring story.  Directed by Academy Award nominee Gus Van Sant, whose work you may have seen in "Restless" and "Milk", "Good Will Hunting" stars a young Matt Damon alongside Ben Affleck, Stellan Skarsgard, and Robin Williams.

Will Hunting (Damon) is a 20-year-old street kid living in South Boston.  He spends his nights pounding beers and chasing tail with his gang, including his best friend Chuckie (Affleck).  During the days, Hunting mops floors and cleans toilets at the Massachusetts Institute of Technology.

At work, Hunting discovers an advanced math course has posted a near-impossible mathematical equation outside the classroom.  It turns out Hunting is a genius and is able to solve the elaborate math quickly and easily.  It's clear that Hunting is special.  As it turns out, "he's wicked smart."

Upon some investigation, Professor Gerald Lambeau (Skarsgard) realizes it is Hunting who has solved the equation and uncovers the brilliant hidden talent waxing the floors of the halls.  Lambeau attempts to take Hunting under his wing, but Hunting refuses.  He is content with his life, and sees no reason to be mentored by MIT professors.

Hunting and his crew head to a bar near Harvard for a change of scenery.  There, Hunting meets a beautiful Harvard law student, Skylar (Minnie Driver).  The two instantly connect.  Hunting is ecstatic to have finally found someone he can relate to on an intellectual level.  Skylar opens Hunting's eyes to the possibility of love and compassion, something he had long considered a fairy tale after a horrid childhood with an abusive father.

Things take a turn for the worse when Hunting is caught up in a street fight and ends up getting hauled away by the police.  Instead of a regular jail sentence, Hunting is sentenced to serve under the supervision and guidance of Lambeau, who has agreed to provide Hunting with a therapist.

Hunting's therapist Sean Maguire (Williams) must break through Hunting's tough shell to help him realize his true potential.  It is only after a few loud appointments that the two men finally come to a mutual respect for one another, allowing Hunting to explore his real goals in life with Maguire's aid. "Good Will Hunting" is a phenomenally inspiring story.  Hunting is an innocent kid with infinite yet unguided potential.  Maguire was once a highly recognized man of psychology, but lost his direction after losing his wife to cancer.  In combination, Hunting and Maguire not only help themselves, but each other as well.

Damon, Williams, and Affleck all won Academy Awards for their work in "Good Will Hunting".  The film itself was also awarded the Academy Award for Best Original Screenplay.

-        Hunting and his journey is relatable to all; embracing ones potential.

-        Williams's performance as a troubled psychologist is his best acting to date.

-        The soundtrack is repetitive in tone and gets boring.