The first step to finding your destiny is leaving your mother's basement. 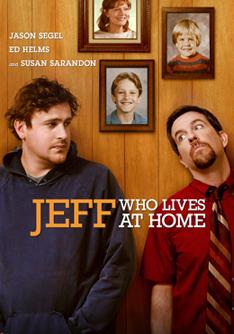 Check out the trailer: http://www.youtube.com/watch?v=uLFhuOz_-fY

Fate is a troubling aspect to contemplate.  Many shun the possibilities of such a lack of control.  To these people, being without sway over the things that happen to them is erroneous.

However, some are firm believers in fate, and consider all happenings predetermined.  From finding a quarter on the sidewalk to an unexpected noise while turning on the shower, all occurrences happen for a reason.  To these people, there is no such thing as an accident or purposeless event, only fate.

Jeff is one of those people who believe in fate.  He's 30-something, jobless, and without direction – plus he lives at home – just in case you hadn't guessed that.

Jason Segal plays the role of Jeff, the title character in "Jeff, Who Lives at Home."  This unique film is written and directed by Jay and Mark Duplass, new players in the indie film market, but you may recognize the name, having seen the Duplass brothers' previous works, "Cyrus" (2010) and "Baghead" (2008).

Jeff is a part-slacker, part-stoner living in his mother's basement.  He's all grown up, but missed the memo about doing something with his life.  One day, while Jeff is partaking in his usual morning routine of smoking weed and watching television, he receives a phone call.  "Kevin?  Is this Kevin?" asks the caller.  Since Jeff doesn't live with a Kevin, he hangs up the phone.  Wrong number?  No such thing.

The name Kevin is the newest sign for Jeff, a clear indication of fate at work.  He needs to find "Kevin."  It is his destiny, but not before getting an errand called in from his mother, Linda (Susan Sarandon).  Linda needs Jeff to buy a piece of wood paneling to repair their kitchen cabinet.

With eyes constantly peeled for anything "Kevin" related – searching for the next step in his predetermined fate – Jeff makes his way towards the hardware store.  Eventually, Jeff becomes distracted by all of the "Kevin" signs revealing themselves in front of him.  He pushes his mother's request to the wayside.  His fate is too close to ignore.

While chasing beacons of fate around town, Jeff runs into his brother, Pat (Ed Helms).  Pat is the complete opposite of Jeff; a gainfully employed, married man with a Porsche.  However, he is also a hopeless romantic fighting a losing battle in a dwindling marriage to his wife; Linda (Judy Greer), whom Pat suspects is having an affair.

Taking nothing as a coincidence, Jeff embraces his encounter with Pat.  Together, they try to determine whether or not Pat's wife is cheating on him.  In the process, Jeff and Pat confront the differences between themselves, learning a thing or two about fate and destiny in the process.

There are only two parts of "Jeff, Who Lives at Home" that don't work.  First, the constant and abrupt zooming-in on the actors (crash zooming) becomes annoying by the end of the movie.  It seems as though it was intended to make the dialogue seem more important, but it just hurts your eyes.  Second, there is a romantic side story centered on Linda having a secret admirer at work.  It is unrelated to Jeff's adventure and is completely ineffectual.  While it is an entertaining side plot, it is useless in regards to Jeff's search for his destiny and the flow of the film.

"Jeff, Who Lives at Home" is a pretty interesting movie.  It's funny, it's serious, and it's subtle.  In the genre world, it would be considered a "dramedy." Jeff, the lazy man-child and Pat, the nervous, stressed-out professional make a great combination on screen, keeping the scenes full of entertaining and insightful commentary.

While "Jeff, Who Lives at Home" may be more serious in tone than humorous, it will keep you chuckling throughout.  With good acting from the entire cast, an uncommon theme, and Jeff's unorthodox character, this one's pretty darn good.

-          The tug-of-war battle between fate and free will is a compelling and important theme.