Joe Movie review of The Sitter 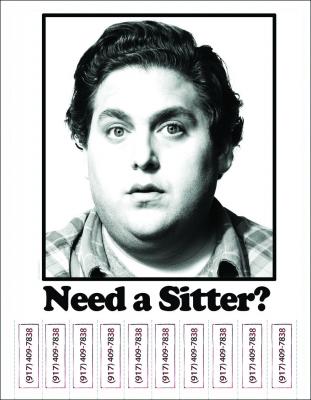 What Joe Movie is all about: I'm Joe, and I will be reviewing two films every week that are available for your viewing pleasure from Family Video. Enjoy.

We can all appreciate a good comedy.  Laughter is the greatest medicine after all; and it comes in quick, spontaneous doses in Jonah Hill's last film as a chubby joke machine, "The Sitter".  Directed by David Gordon Green, whose work you may have seen in the hit HBO series "Eastbound & Down" and Golden Globe nominated "Pineapple Express," "The Sitter" delivers hilarious (and vulgar) dialogue with non-stop laughter throughout.

The premise of "The Sitter" is nothing new, a tried and tested formula of "Slacker boy wants to impress the girl and sleep with her, but must overcome many obstacles while becoming a better person in the process."  However, "The Sitter" adds in a unique twist: three deviant, outrageously entertaining kids with their own twisted issues.

Hill plays Noah, a college dropout who is stuck in a rut with a pointless relationship and no direction in life.  When his mother begs him to babysit for a friend, Noah reluctantly accepts, having no idea what kind of night he is in for.

While Noah is babysitting the kids at their home, he receives a call from his girlfriend explaining that if he brings cocaine to a party she is at, she will have sex with him—something Noah has been working on for a while.
What follows is "The Hangover" meets "Uncle Buck."  Sounds pretty good, right?  It is.  The three children Noah is assigned to babysit include a prima donna, shallow pre-teen named Blithe (Landry Bender), her insecure brother, Slater (Max Records), and their adopted pyromaniac brother, Rodrigo (Kevin Hernandez).

I was reluctant to watch The Sitter, never being much of a Jonah Hill fan.  Don't get me wrong, Hill is fantastic in "Superbad", and has an impressive record of successful films under his belt.  I was just a bit nervous that his persona of the overweight, vulgar teenager is becoming repetitive.  Boy, was I wrong.

"The Sitter" is awesome, and mostly because of Hill.  Actually, entirely because of Hill.  The three kids he is "babysitting" throughout the film are just there for added humor, supplying no progress to the story or any real importance, just a ton of laughs.  Also, a cameo from rapper turned actor Method Man adds some spice to the story, playing his characteristic thug persona that is always laugh generator.

You won't find yourself without a smirk on your face at any point throughout "The Sitter."  Hill is great as usual, and the children he babysits keep the humor consistent.  Hill's type casted persona is still in full swing and not getting boring one bit, and I couldn't be happier about it.  A brilliant combination of witty writing, crafty directing and superb acting makes "The Sitter" consistently funny through its 81 minute run time.

Check it out at Family Video tonight!