The Senate candidate plans stop at the Bayfront Convention Center

by Nick Warren
View ProfileTwitterInstagramRSS Feed
August 12, 2022 at 11:40 AM 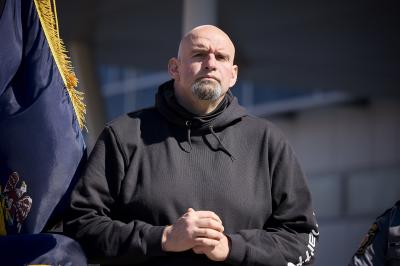 For the first official rally following his stroke in May, Lieutenant Governor and candidate for US Senate John Fetterman is stopping in Erie.

The rally will be held at the Bayfront Convention Center, running approximately two hours from 5:30 to 7:30 p.m.

The well-known politician got his start as the mayor of Braddock, PA., a small suburb to the east of Pittsburgh in Allegheny County. Virtually from day one, Fetterman has been a champion of the rust belt, even having Braddock's zip code of 15104 tattooed prominently on his right forearm.

It makes sense, of course, that Fetterman would choose Erie as his first stop. Both the  city and the county have been proven to be a bellwether ground politically. A swing county in a swing state, Erie is often the focus of political attention, and for good reason.

With Fetterman's PA bona fides, it's been easy to come after his opposing candidate, Mehmet Oz (aka television's Dr. Oz) for being a longtime New Jersey resident. Backed by Trump, Oz represents a looming group on the right.

This is the first senatorial election with both candidates having had a large public presence prior to their nomination. On social media and in political ads, Fetterman has gone after Oz for being a "carpetbagger," something the Lieutenant Governor no doubt takes as an affront both personally and politically, having a shown a lifetime of pride and care for his home state of Pennsylvania.

Fetterman made a name for himself early on, guesting on shows like The Colbert Report as early as 2009, going on to be elected Lieutenant Governor of Pennsylvania in 2018, alongside Governor Tom Wolf.

In what will be his first major public appearance since suffering a stroke the week of the 2022 primary election, all eyes will be on Fetterman in regards to both his physical condition and his message. A well-spoken and captivating political presence, Fetterman has grown to represent a new face of the Democratic Party to both Pennsylvania and the nation as a whole.

"The only issues lingering from the stroke" Fetterman clearly told KDKA news are "just having some auditory processing every now and then, and I'll miss a word sometimes and I might mush two words together sometimes in a conversation, but that's really the only issue. It's getting better and better every day."

The general election is set for Tuesday, Nov. 8.

I truly cannot wait to see you all tomorrow 🤩