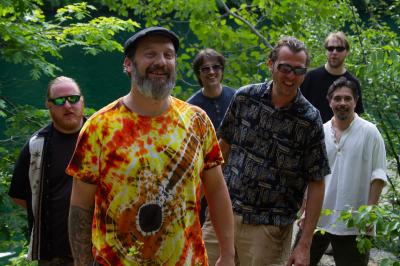 facebook.com/johnweltonandtheawakening
John Welton (front left in tye-dye) and the Awakening bring their sunny brand of roots-inflected jam to Altered State Distillery on Friday, Jan. 24. Even if you go alone, Welton compares hearing each song to making a new friend.

Veteran guitarist/vocalist John Welton's whole deal is — and always has been — prescribing music as medicine.

And he plays it well — bringing crowds to genuine states of jubilance (that's most definitely good for you) on the regular with some help from his friends. He's been at it a good long time, too, with an impressive, decades-long run chock full of jam-worthiness behind him: Waterband, The Recipe, Burning River Band, New Leaf, Willy Mac Music, and Adam's Ale among them.

These days, beside him is The Awakening, a fixture in the region's jam scene and a favorite among plenty of feet-light, sunshine-heavy roots-jam fans.

Welton & The Awakening will be bringing their spirits of positivity — and inspiring everyone to groove — when they visit the recently opened Altered State Distillery on Friday, Jan. 24.

"Every song seems to speak directly to the listener in a way that makes them feel like they have just found someone who truly understands them, like they just made a new friend," Welton says in describing The Awakening.

Good and high-spirited, indeed: Cheers to that.