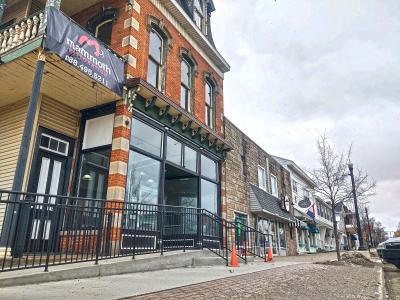 Family and friends from out of town call from time to time.

They check in with us ... How are you? How are the kids? Everyone's still healthy? School's still going well? And work too?

But, since about halfway through 2019 (like, a couple of lifetimes ago) there's always — always — another big, important question baking there too: When, for the love of all things good and fair, is John's reopening?

Sure, there's always the newer, also-awesome John's Wildwood Pizzeria location at the Erie Brewing Company near Behrend. People can, and do, make the drive there.

But, the thing is, it's been hard times all over, and the Edinboro-area people — and those close to them — really want that original downtown 'Boro pizza shop back.

Since my wife and I are both longtime Edinboro folk, with a combined total of almost two decades of past professional experience in the famous John's Wildwood field, our people hope that we might know some things.

They hope we have some inside info on a clear and concise time frame (as in calendar-date and clock-time) for when, after being shuttered since June 2019 following a major fire, the Edinboro John's ovens will fire back up for the hungry masses.

And John Bellucci — who's owned and operated the Edinboro shop for over 40 years — says neither does he … but it's coming, and getting closer by the day.

Bellucci says at this point, he's trying to retire the word "soon" from the conversation. "I made that mistake early on," he says. "People think I mean tomorrow, or next week … it isn't 'soon' enough."

But renovation work — which includes new entry and restroom accessibility, new equipment and plenty of shining stainless steel — has been happening at the historic downtown structure that houses John's for quite a while now, and a glance at the building shows a shop basically at the ready.

"You can see it's getting close," he says.

The COVID-19 pandemic coinciding with the reopening effort has certainly not made the process less complicated, Bellucci says, and some customers have expressed bitter frustrations at the inability to get their John's fix, for pickup or delivery, day, evening, or even in the weest, bleariest hours of the night.

One hangry person posted a measly one-star review at one point, Bellucci says, because staff hasn't been answering the Edinboro phones. "We don't even have phone lines installed yet."

But it's easy to understand that dude's demeanor.

People love pizza — even bad pizza — and John's Wildwood isn't bad pizza. In fact, it's better than not bad. It's actually really good, and it's got a whole bunch of local media best-of food awards — including a 2020 Best of Erie award for "Best Pizza" — to prove it (along with a pretty fanatical fan base).

"The support is unbelievable," says Bellucci.

When John's does reopen — which is getting sooner rather than later all the time — Bellucci says it'll likely be soft-style rather than grand. Along with all the other Herculean tasks that go along with pulling off such a feat, he and his management need to train what will basically be an entirely new staff.

So take this from someone who's been on both sides of that line many, many times: Be patient, and kind, and enjoy your experience.

And don't forget the Big Ranch.