Junk Shop Failure Succeeds with Bottoming Out at Bobby's Place

Junk Shop Failure can perfectly camouflage themselves with a humbly inviting, exterior sound. 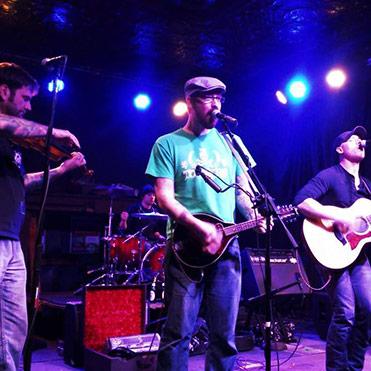 Junk Shop Failure can perfectly camouflage themselves with a humbly inviting, exterior sound. Josh Zimmer plays mandolin, while splitting the main vocal duties with Jesse Guerrein on acoustic guitar. The two share a back-and-forth camaraderie that helps to fuel their songwriting. "When we write, it's usually Jesse and I in a basement somewhere with a couple of instruments and a 12-pack," Zimmer explains. "It's helpful to have two people writing, so when one of us shuts down and can't finish something the other one can pick up the slack."

Using lighter acoustic instrumentation, they construct a sound that's equal parts punk rock and prairie. Violinist Kevin O'Neal adds welcome texture to the mix. The sound is reminiscent of the Pogues and other folk-inspired acts. But don't expect an affected Celtic brogue. Just below the surface is a bleaker, cynical point of view that you might not expect. If you were to get to know any of the band's five members, though, such a winkingly mordant tone would come as no surprise.

It's right there in the name, after all. The band was formed in 2013 inside of Coach Z's Consignment Shop. Bassist and then-store owner, Zac Lucas, referred to his business as a "Junk Shop" without hesitation. Guerrein recanted that "Zimmer, Zac, and I just decided to hang out at Zac's junk shop. Zimmer had borrowed Kevin's brother's mandolin, and before I got there they had already worked out our cover of 'California Love.'"

That song made its way onto the EP. It's more lighthearted than most, but it's also undeniably charming. The seven tracks of Bottoming Out all hit in different ways: beginning with the anthemic singalong of "We All Want to Run," transitioning to the emo-tinged "Watching You Walk Away." There are mournful ballads like "Between the Bridge and the River." The EP culminates in the ne'er-do-well celebration of "Tin Whistle." The EP, recorded by drummer Jeff Burick, masterfully captures the band's spirit and ethos. The group is already looking ahead, planning to release a seven-inch record this August, and a full-length album at the end of the year.

Joining the band will be Erie favorites, This American Song. The quintet blends rock and roll and Americana, with indie sensibilities. Musical brethren, the band shares a cat's cradle's worth of musical ties to members of Junk Shop Failure. Earlier this year, the band helped launch Presque Isle Records, a collective label for like-minded musicians. The Ice Cream Socialists will also be featured. This under-showcased act will be championing their intelligent post-rock propaganda. New local band, The Cartwrights, will open the show with pop-punk hooks, forged by impressive local resumes. – Nick Warren