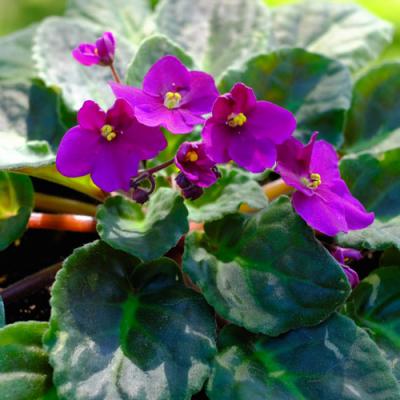 At a baby shower I attended several years ago, guests were given African violets as favors. Though I'm generally an equal opportunity greenery fan, I've never cared much for African violets (or baby showers – but at least this one provided gin). I always equated the plants with hospitals, offices – places where they'd be mostly ignored.

But this little African violet donned purple-magenta flowers atop rich hunter green leaves, bold and bright and lively. In January, it bloomed. And in February. And even in early March, when our region is awash in torpor-tinged slush.

Then it finished out its initial bloom cycle. I watered it, but that's all. I moved across town, so it did, too. For years, I gave it inadequate light, often diffused by other foliage I preferred. It had to know, poor thing. But it just wouldn't die.

Last year, we installed a wider shelf by the sunny back door, and I – feeling guilty for neglecting the African violet – moved it there. Out of its green depths emerged a new trio of sweetly royal blooms. I admired the little sucker's pluck.

Eventually, thinking I was giving it a big boost in the world, I transplanted it to a much more spacious pot. You're only supposed to go up one size when repotting, but I figured – with all of those years of neglect – the waif deserved a major upgrade. The new pot was bigger and fetchingly patina'd, like dishes on a vegan hipster's blog.

It finished out its blooming again and then stopped. For months. Its leaves looked healthy, but no flowers emerged.

One day this past March, I was reading a gardening website in antsy anticipation of actually gardening, and I came across some information about how healthy African violets will bloom continuously, under the right circumstances.

Turns out they don't want a larger pot. Turns out they need a pot just big enough, with just enough soil. Nothing fancy. A little room, some light, and minor care and support.

So I "right-sized" the plant by transplanting back down a size. Within weeks, blooms reemerged. Now they seem unstoppable.

A lot of us who live in Erie are like that. A smaller, simpler, more modest city is our right size. Too big, and we can survive, but we're not going to bloom.

A lot of us who live in Erie are like that. A smaller, simpler, more modest city is our right size. Too big, and we can survive, but we're not going to bloom.

There's big talk around election time about colossal dreams, expansive ideas, and ways we could make our city more like the major cities who've gotten it "right."

But right for us isn't necessarily the same as right for everywhere else. And as we dream these big dreams and germinate these big notions – a few of which might even take root – it's important to remember that what Erie already is is worth cultivating. And, to not lose our senses of humor.

This city celebrates a few things I'm not crazy about – its role as a perennial tour stop of washed-up 80s bands, for one.

But it's also the right size for a lot of us. Many of the folks here creating, owning, managing, or simply being are just as gifted as those in bigger cities. Replanted there, they would surely survive. But they might not bloom as well.