Tryin' to make it real. 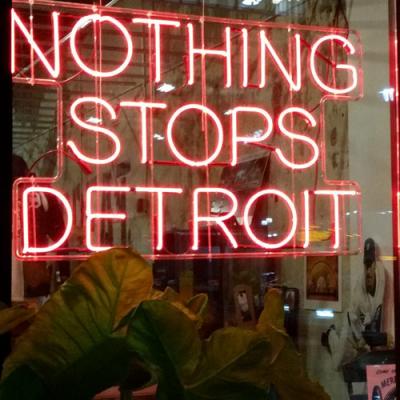 I love the lie and lie the love / A-hangin' on, with push and shove

At first, I can't place where the song's coming from. It sounds great, and on this – the second night of the Detroit Jazz Festival – I'm half-expecting it to be live from a nearby stage.

I'm half-expecting anything, in fact.

We've grown accustomed to surprises and cacophony by now, as the sounds of thousands bump up against one another throughout the closed streets of downtown. Our walk is cadenced by bucket-drumming buskers, then loudspeaker proselytizers, then a teenaged trombone quartet, then world-renowned jazz stars, then chanting Hare Krishnas … and on like that for several blocks.

But "Compared to What," Gene McDaniels' 1969 protest song against the Nixon administration and a mosaic of other societal ills, is blasting out of two killer speakers mounted pannier-style on a bicycle.

Bike Man, weaving in and out of the crowd on this hot summer night, would draw attention even without music blasting. His entire bike frame – plus wheels – is lined in twinkling blue and purple lights. Chopper-high handlebars arrange his upper body into broad-shouldered defiance. And his face wears a street smart, "don't mess with me" gaze, like he's acting out the lyrics he plays.

The President, he's got his war / Folks don't know just what it's for

Nobody gives us rhyme or reason / Have one doubt, they call it treason

As he slow-pedals by, the marching crowd morphs into a hymn-like choir. A few white hippie chicks raise their arms and sway a la Woodstock, and a group of to-the-nines-dressed black women hip-shake as they walk – all singing along.

Church on Sunday, sleep and nod / Tryin' to duck the wrath of God

They really got to be some kind of nut (I can't use it!)

But we can use this: one of the funkiest, most instantly-affecting tunes out there – especially the Eddie Harris/Les McCann version from the 1969 Montreux Jazz Festival, which we're enjoying courtesy of Bike Man.

The whole thing is totally spontaneous, of course. All in-the-moment improv, all pure reaction to the inspired moves of whoever's also there. Exactly like jazz. And exactly like what Detroit seems to be doing, as it's tryin' to keep it real.

The whole thing is totally spontaneous, of course. All in-the-moment improv, all pure reaction to the inspired moves of whoever's also there. Exactly like jazz.

And exactly like what Detroit seems to be doing, as it's tryin' to keep it real. You can see it in countless murals with rising-from-the-ashes themes, and on ubiquitous t-shirts that proclaim, "Detroit Hustles Harder" and "Nothing Stops Detroit."

So you can see real Detroit. But more importantly, you can feel real Detroit. And it feels like a city facing its reality with the sort of defiant attitude that'll call bull on the likelihood of trickle-down-touting suit-wearers to fix everything.

Detroit is beautiful, by the way. Gorgeous architecture, abounding outdoor sculptures and murals – and a DIY, nothing to lose ingenuity that seems to liberate artists and creatives. After all, they're the ones who'll make the city soar.

We can – and have – drawn a lot of parallels between Detroit and Erie, and there's plenty to learn from that city as it manages its trial-and-error ascent.

But Detroit's attitude is what we Erieites need most of all.

Looks like we always end up in a rut ...

Erie has heart, soul, and humor to burn. But sometimes we take ourselves a little too seriously. As "Compared to What" shows, heavy truths are most effectively communicated with a funky-as-hell beat.

If we're tryin' to keep it real, the best thing we can do is to lighten up and get bold.