The Islamic State is moving toward Baghdad, so it's time for the U.S. to join a conversation that's been going on without it for several month. 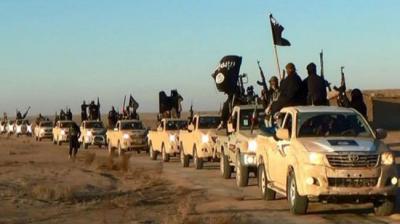 Earlier this summer, we shared the story of Maitham Basha - a "New American" who made Erie his home after a long journey from Iraq.

When we spoke, Maitham had just returned to Erie from Iraq where he had visited for the first time in fourteen years to see family and to record the experiences of Iraqi and Syrian refugees living in United Nations' encampments.

In our conversation, Maitham shared the horrific tales of mothers who murdered their own children in order to save them from the fate of the Islamic State (aka. ISIS or ISIL)

"A man from Mosul told Maitham a story of the Islamic State  – the Sunni-led terrorist group formerly known as the Islamic State of Iraq and Syria, or ISIS  – coming into homes in Mosul, counting the number of women in the home and spraypainting that number on the outside of the house so its soldiers would know how many women to search for and rape under the cover of night.

Another man told him of a woman who took her daughters to her balcony and shot them so they wouldn't be raped and killed by the insurgents, as had been the experience of her neighbors."

Stories like these became familiar to the narrative of those on the ground in northern Iraq, but they had not yet become part of the mainstream press which was typically filled with the governmental and military quagmire Iraq had become.

At that time, ISIS remained a problem of northern Iraq and Syria. Now, the Islamic State is poised to take Baghdad.

In the past 48 hours, more than 180,000 Iraqis have fled their homes in anticipation of the arrival of ISIS. For the sovereign residents of Iraq, execution would be a welcome alternative to life under lawless, degenerate bandits.

Because ISIS is closing in on the capital, because it has yet to be contained, the world is meekly acknowledging that the Islamic State poses a greater threat to humanity and the Iraqi people than simply behaving as a politically destabilizing force with no regard for hostages.

In a relatively simple five paragraph press statement on October 14, Secretary of State John Kerry outlined just a few of the reasons why the Islamic State needs to be dismembered.

"ISIL now proudly takes credit for the abduction, enslavement, rape, forced marriage, and sale of several thousand Yezidi and other minority women and girls—some as young as 12 years old. Just as despicably, ISIL rationalizes its abhorrent treatment of these women and girls by claiming it is somehow sanctioned by religion. Wrong. Dead wrong."

Kerry is late to the party and should not be rewarded for his tardiness. The international community turned a blind eye to the social problems of Iraq so that it could debate the merit of another term in office for Nouri al-Maliki.

No we must beg the question:

How is it that an Iraqi in exile who spent a few weeks in country can come home with these stories, but it takes the Islamic State knocking on Baghdad's back door for the U.S and the international intelligence community to recognize the heinous depravity that characterizes these socio-political outcasts?

The rhetoric has been introduced. Whether or not it serves as motivation to deal with the emergent problems of the Iraqi state remains to be seen.