King's Rook Gets a 'Werk' Out

The Werks bring their magic to King's Rook Club. 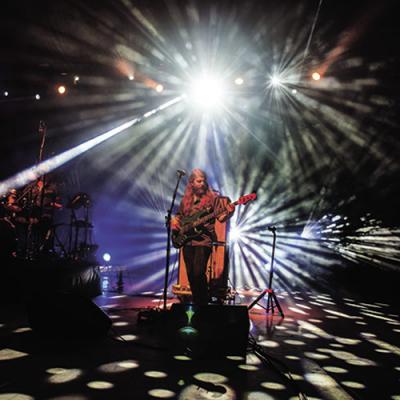 My first memory of The Werks is from some time around 2008, when a bunch of hippie kids were street-teaming for them at some big midsummer music festival in Ohio, plastering stickers with the band's cognomen all over the place all weekend.

For as much as they were on everything else, though, they weren't on that festival's lineup.

I did see The Werks doing their thing the next year, however (hey, I remember those stickers!), and was absolutely blown away by them.

And, sure enough, as a few more years came and went, The Werks really got into their groove, becoming a fixture on the larger region's live progressive jam (or whatever you call it) scene, cultivating a devoted fan base throughout the country, and even going on to develop and expertly produce their own well-loved summer fest, the annual Werk Out Music and Art Festival.

Suffice to say in the live scene's league of heavy-hitters, The Werks are one of the all-stars.

Cool, then, that they're making the King's Rook Club one of the stops on their current fall tour, passing through to throw down their masters' brew of psychedelic-dance-funk-rock.

Not that they ever need a reason to jam, but the show will support the recent release of their celebrated new LP, Magic, of which a reviewer at Glide Magazine had this to say:

Magic is "filled with both cryptic electricity and hypnotic bliss. The Werks have taken their songwriting to the next level, incorporating a kaleidoscope of rock genres while retaining a perfect dose of soul."

"This is a recording of the music that's in our souls," he said. "In a way, the past decade has been leading to this moment. We play and write so seamlessly together now, we're able to channel the inspiration in our hearts out into our instruments, and come at this from a pure place."