"Let Me Tell You Something, Brother": 'Fighting with My Family' is Funny, Heartfelt and Utterly Predictable 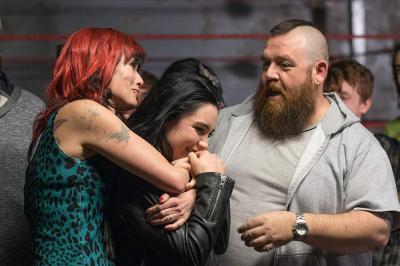 The world of professional wrestling has had a rocky relationship with the movies. For every powerful drama like The Wrestler, there have been two ridiculous cartoons like No Holds Barred and Ready to Rumble. The challenging, physically grueling, and often very silly business is difficult to portray on film and while the new wrestling film Fighting with My Family doesn't do anything to elevate the sub-genre, it's entertaining enough to make its runtime go by easily.

The film follows siblings Saraya and Zak (Florence Pugh and Jack Lowden), children of small-time wrestlers with dreams of making it to the big time. Their dreams are answered when they are invited to audition for the WWE. After Saraya gets accepted while Zak is sent packing, she begins the arduous training that will eventually turn her into the superstar known as Paige, but at the same time, a rift begins to grow between her and her brother

The filmmaking is nothing special, and at times it's frankly a little sloppy with shots and editing that look like a made-for-TV special and a story that hits all the marks of the "rising sports star" playbook. That being said, the actors and some occasionally witty dialogue make the film an entertaining, if predictable affair. It also does a good job portraying the intense physical training that is required for a new wrestler, particularly a female wrestler in an age when women's wrestling was mostly seen as a joke. As a fan, I can appreciate all that, but non-fans may find little to enjoy in the film's familiar narrative. — Forest Taylor

Sensory Overload: 'Alita: Battle Angel' is Beautiful, but a Little too Crowded