Plenty of laughs to be had ferda boys and girls 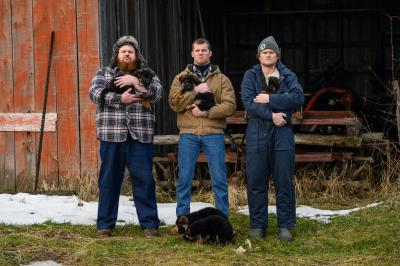 Back in 2016, Jared Keeso and Jacob Tierney turned the YouTube series "Letterkenny Problems" into a television show, depicting the happenings of the small rural community in Canada. Now into their ninth season, the series continues to keep viewers interested with their dry humor primarily consisting of rapid fire wordplay. The seven episodes are so easy to watch, one is left eager to find out what happens next.

The storylines for this season feel less intense than those that came before it; there are fewer fistfights, less emphasis placed on relationships, and very little hockey. That being said, the episodes are every bit as entertaining. It appears Keeso (who plays Wayne, known as the toughest guy in Letterkenny) wanted to dedicate equal screen time to each and every character. As a result, we get to see the chemistry between Wayne and his sweetie, Rosie (played by Clark Backo), many gatherings held at Modean's 3, the local bar, and even get to meet Squirrely Dan's girlfriend, who up until this point had just been mentioned in several awkward bouts of oversharing throughout the series.

This season has many more side plots to offer, and though every season has had the same number of episodes, this one feels like the shortest. While well-written and engaging, following so many characters all at once feels the slightest bit like stalling. All the same, once the next season hits, the audience will be quoting the show on the couch like always, exclaiming "Pitter patter, let's get at 'er!"