LifeThruMusic is doing big things for our city's youth. Find out what they're up to. 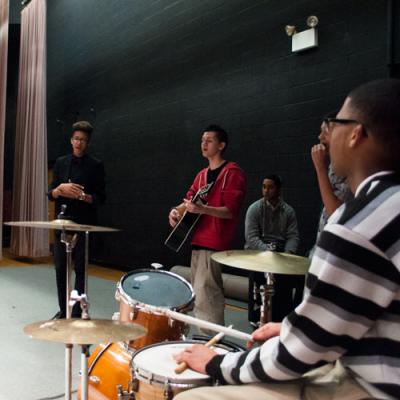 Sam Smith's hit song "Stay With Me" was written in the key of C major.

This is one of the first things I learn when I arrive at East High School in Erie on a chilly January afternoon. I've dropped by for a firsthand introduction to LifeThruMusic, a local mentoring program directed by musician Corey Cook.

It's a Monday afternoon, classes have just ended, and about fifteen students gather around an electric piano in the school's band room. Cook asks if anyone has a song they'd like to learn how to play. A few teens take out their phones, load up tracks, and offer suggestions. Smith's "Stay With Me" is one of them. Cook doesn't take long to intuit the basic melody, and uses it to teach them about keys and charts.

LifeThruMusic has provided free music instruction to local kids at East High for about a year and a half now.  But the program isn't exclusive to East High attendees – in fact, elementary school students (grades four and up) are also invited to attend. The young people meet in the mid-afternoon for three ninety-minute sessions each week, on Mondays, Wednesdays, and Fridays. The first half of the class follows a traditional lecture format, with Cook and others offering direct instruction to everyone. Later, smaller groups splinter off for more intimate mentorship.

As we're gathered around the piano, Cook explains the mechanics behind "Stay With Me" through a number system designed to translate its melody into multiple keys. According to Cook, this is essential because "if you learn how to play something one way, you have to learn how to play it twelve different ways" as well. Through this system, he provides a brief overview of scale systems and chord progressions as well.

By the end of the tutorial, I understand how an MP3 on a cell phone can translate into a fully realized piano melody – and how that melody can be played in a number of keys depending on mood or preference. Since my most recent piano lessons concluded in the late '80s, I can assure you this is not because I'm an adept learner. It's because Cook is a strong teacher with the focus and patience necessary to keep young people interested.

Once Sam Smith has been demystified, the students break into smaller groups. Sixteen-year-old Victoria Duck and eighteen-year-old Nina Arrington stay with Cook at the piano for more advanced instruction. Together, they iron out the basics of a surprisingly wholesome Nicki Minaj ballad called "Grand Piano." Four or five students gather to watch, commenting and joking occasionally. But mostly listening.

As they get to work, I follow seventeen-year-old Daniel Stanton to the gym's storage room where drum instruction takes place. As LifeThruMusic's peer tutor, Stanton focuses on "different strokes, time signatures, and the basic fundamentals of drumming." He's been playing the instrument for about fourteen years, and plans on studying to become a professional musician when he gets to college. Stanton tells me that he's been accepted to two universities already, and is waiting to hear from a third.

Once we arrive at the drum set, a ten-year-old he's been working with named Malaki Thompson gives us a demonstration. It's extremely impressive – so much so that I assume he's been playing since he was old enough to get his hands around the sticks. Not so, it turns out – this is just his third year of drumming.  There's a power and professionalism to the performance that stands in stark contrast to the young kid I see before me. He's got natural talent, and he seems to have found good people to help him develop it. Which is great, since he also wants to pursue music in college (eventually).

Corey Cook considers the relationship between Stanton and Thompson essential to LifeThruMusic's vision. Growing up, five of his close friends helped him sharpen his own skills, and they all became professional musicians as adults. Accordingly, Cook believes that "peer-to-peer support is extremely important in music. Sometimes when it's just with a private instructor, it can only take you so far. Having other students push you – and a teacher as well – is very effective."

Next to the band room, a group of seven students gather in one of East High's three practice spaces to work with LifeThruMusic Supervisor India Henderson on songwriting. Henderson encourages them to "think creatively and write songs that are positive." When asked about content, she says they typically deal with personal experiences – "things they've been through, things that are going on now, and how we move on and get past things."

Under Henderson's supervision, the students composed a song about bullying called "You're Special." It's a catchy R&B track, pairing a somber piano melody with lively electronic beats. The hooks wouldn't be out of place on a Rihanna album, but the lyrics speak more directly to the anxieties teens face in high school. Henderson urges her students to think of the songs as "love letters to themselves," and to use writing as a tool of empowerment. That message shines through on "You're Special," which was professionally recorded with LifeThruMusic and can be purchased on iTunes for $0.99.

Henderson, who has known Cook since childhood, began her work with LifeThruMusic through an internship at Gannon University. When she completed her degree in Entrepreneurship, she was so inspired by the work they were doing that she decided to make a more long-term commitment. Currently, she's building a program through LifeThruMusic designed to encourage teens to "get familiar with a business plan" to make their music marketable. Henderson sees a lot of talent at the after-school sessions, but she realizes that the students "are going to need to know that entrepreneurship is an option for them."

With the new programming in mind, I ask Cook about the future of LifeThruMusic. He has practical goals, like acquiring equipment upgrades and gaining access to a permanent studio space. Some of his priorities are more ambitious: "My five-year plan is to expand throughout the state. We already have an operation in the works in Harrisburg, and in Pittsburgh as well... We're hoping to franchise [the program] and branch it out across the state." The Harrisburg project will consist of a small-scale music production program set to begin in October. LifeThruMusic has hired a local producer Justin Williams to invite six students into a real recording studio, where he'll show them what they'll need to get started in the industry.

By 5 p.m., the session is drawing to a close and people are starting to pack things up. As I'm asking Cook my final questions, I hear music coming from one of the practice rooms. Eventually, the two of us walk over to see what's going on.

A core group of students have gathered around a piano for an impromptu sing-along to "If I Ain't Got You" by Alicia Keys. They're being lead by Alex Staley, a fifteen-year old with impressive musical skills and a beautiful voice. Despite his best efforts, everyone is struggling to keep a straight face and the song is frequently interrupted by laughter. No one seems to mind. Some are taking the music seriously, and some are just goofing around. But everyone seems to be having a great time.

This final scene reminds me of my own high school days. As the teens struggle to make their way through a casual, giggly rendition of a familiar song, I remember how music helped me to cultivate my own adolescent friendships. It occurs to me that a real sense of community is developing here, and LifeThruMusic is making it possible.

For more information about LifeThruMusic, visit them online at: lifethrumusic.org

Dan Schank can be contacted at dSchank@ErieReader.com