You Ought to Know: Corey Cook

Out of broken glass and busted parts of our city grows hope. 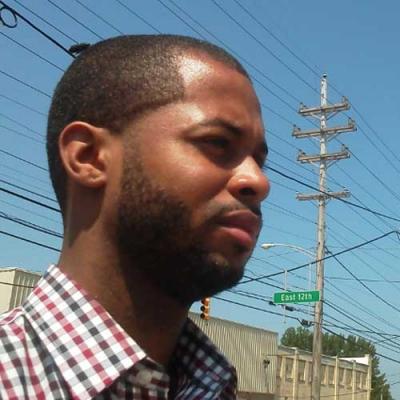 For Corey Cook, drum stools have always served as driver's seats. He sat down at the first one, he said, to get away from having to use his voice.

At 14 years old, "I hated singing. I couldn't sing for a lick," Cook, now 29, said with a quiet laugh during a recent interview.

So, early-teen Cook told his parents – who'd required that their children be involved in their church's music program – that he wanted to play drums instead. They said sure – and, from the moment he first picked up those sticks at Shiloh Baptist Church, "it was an automatic love," he said.

And ever since, "I've been known as a drummer," said Cook, a crisp-dressed, mannerly, well-spoken man who seems reserved, but not shy; he carries an air of quiet confidence, looks me directly in the eyes as he politely answers my questions.

For over half of his life now, music has "really been my voice," he said. "That's really where the joy comes in: Having that voice, and being able to communicate it through music."

In many ways – maybe in every way – the born-and-raised, lifelong resident of Erie's lower east side said, that joy and the drive to it, realized, encouraged, and labored for early on, "was what kept me grounded. Music was that thing that kept me out of trouble. ...It really kept me out of a lot of trouble."

The kinds of real trouble, Cook said, that many kids in those same city neighborhoods continue to be exposed to today: Drugs, violent crime, and other problems.

A couple of days after interviewing Cook, I came across a local news brief reporting that Erie City police had recovered a stolen car and made an arrest after a man allegedly had his car and cash stolen at gunpoint at an east side intersection. The report said the robbery had happened the same day, some blocks away and about an hour before my late-morning meeting with Cook. The arrested suspect, according to police, was a 16-year-old Erie boy.

Cook said he had friends who got into trouble similar to that when he was growing up. Some, he said, were selling drugs in high school – others, in middle school. There was a period, Cook said, when he found himself starting to head down the same path.

But, ultimately, the music beat out any other distractions. Over the last 15 years, Cook said, it's afforded him a host of once-in-a-lifetime opportunities, putting him behind kits throughout Erie and beyond, in much larger metropolises like Detroit, New York, and Philadelphia. Along the way, he's met and collaborated with many other artists, honing his crisp, virtuoso drumming style (and putting considerable work into piano, among other instruments) while also getting a real-time education in what modern music – as an ever-evolving, ever-more-tech-driven industry – is all about.

And now, at the inner-city Erie schools he attended, Cook's taking the musical experience that's always been a vehicle for him and turning it into a pilot, directing itself toward providing kids growing up in the same neighborhoods he's always called home opportunities to learn all about music – and to see, and show, just where their talents (once realized, encouraged and worked for) could take them.

Cook's new, comprehensive LifethruMusic program is launching this fall with 25 initial student participants from Erie School District's East High and Wayne Elementary schools, all between grades 4 and 12. An outreach program of the local faith-based nonprofit Life in Fulfilled Excellence (LIFE) Inc., the program has a stated mission of facilitating "mentorship and networking opportunities that seek to nurture and inspire the talents of young musicians ... [providing] a platform for young musicians, composers, and artists to develop and enhance their musical abilities."

"We really want to enlighten some of the kids in this area," Cook said, and let those who have the talent and want to put in the work know that "music, right now, has the potential to be a career for you."

All of the kids participating in the pilot program have been identified as disadvantaged youth, according to Cook and LIFE Inc. (which is run by Cook's sister, Erica Willis). Some are low-income students who aren't yet proficient in different areas of study, or who receive free or reduced meals at school. Some are kids who are in the foster care system; others have parents who are incarcerated or struggling with alcohol or drug problems.

As part of the participating students' regular school-day curriculum, Cook said LifethruMusic classes – each two hours long, three days each school week – will offer fundamental instruction in a variety of instruments and general music practice theory, while also integrating hands-on lessons in modern music production and other music-related career opportunities. Being taught by Cook along with his brother, the Rev. Darrell Cook of Christ Community Church as well as other local participating musicians, the LifethruMusic coursework has been developed to cover everything from instruments, music-reading, chord structure and voice training to CD, video and live-performance conceptualization, production and even marketing, according to Cook.

In short, he said, it will provide a host of learning opportunities and experiences that the majority of the kids involved wouldn't likely have otherwise.

The long-range goal, according to LIFE Inc., is "to empower economically disadvantaged youth to break the cycle of poverty and become self-sufficient citizens of the Erie community."

Growing up, Cook said, "I experienced all the same sorts of things that kids growing up here experience today," and, in his experience, having "time in a positive environment" can mean a whole world of difference.

"The types of support I had from my parents (and) the impact my parents had on me was huge," said Cook. And, along with his parents' support and urgings to become and stay involved after seeing that early spark, "the church has been the biggest influence in my life as far music goes."

In implementing LifethruMusic (which has come at an initial cost of about $35,000 in public grant and community-raised funds), Cook said he's continued collaborating with church leaders and, now, with school and community officials. "I've talked to different community leaders throughout the city," he said, and support for what wants to do through LifethruMusic is showing itself.

"I feel this program has the potential to reach many youth in a positive and meaningful way," state Rep. Pat Harkins, whose 1st District represents Erie, stated in an official letter of support issued in May for LifethruMusic. "With our culture's current interest in performance and music, reaching young people in this way can be very effective, adding tremendously to their discipline, confidence and self-esteem. [LifethruMusic] has the potential to impact participants in very positive ways, often when traditional classroom endeavors have not."

"I was raised in music," said Cook, and he's seen, first-hand and time and time again, the power to unite that's within it.

Music "is the language of humanity," said Cook. "It bridges the gaps between a lot of differences."

One of the profile pictures on Cook's Facebook page is an image of him, walking away from a backdrop of Erie city buildings and looking off into the horizon. On the image stands a quote: "Where you are does not determine where you are going."

"I'm right in the middle of everything," Cook said, and "I know good things can come out of the lower east side of Erie."