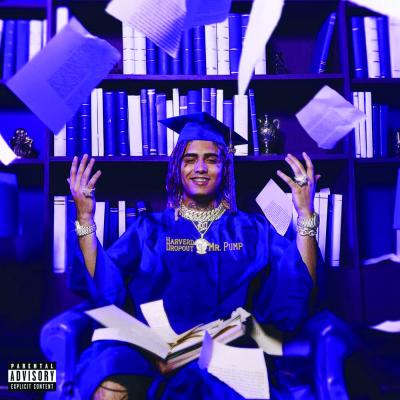 No, that album title isn't a typo. Harverd Dropout is the sophomore LP from "Gucci Gang" rapper Gazzy Garcia, better known as Lil Pump. It is a puzzling and brief affair, and similar to his self-titled debut, the album clocks in at just 40 minutes, spanning 16 tracks. But unlike its 2017 eponymous predecessor, Harverd Dropout sacrifices the one thing Lil Pump had going for him — outrageously loud, but borderline irresistible beats — in favor of thin, EDM-tinted instrumentals that suck the life out of the rapper's admittedly colorful world. Even the features can't save Pump here. Playful verses from Offset ("Fasho Fasho") and, yes, Kanye West on the frustratingly catchy "I Love It," only go to show how out of his element Pump is as an MC. Still, even at its repetitive worst, there are moments that run on pure adrenaline alone, whether it's the beat of "Racks on Racks" or one of the aforementioned features (which include Lil Uzi Vert, Lil Wayne, and 2 Chainz among others). Unfortunately, Pump has some work to do before he earns the presence of those desperately needed peers. — Aaron Mook