Andrew Dolan is a fan of opportunity. When he was growing up, the Collegiate Academy senior had the chance to explore the world of music more intimately with the aid of his parents, beginning a learning process that grew into a love of the art.

by Alex Bieler
View ProfileFacebookTwitterInstagramGoogle+RSS Feed
August 22, 2012 at 6:00 AM 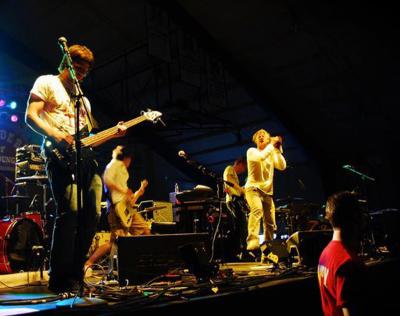 Andrew Dolan is a fan of opportunity. When he was growing up, the Collegiate Academy senior had the chance to explore the world of music more intimately with the aid of his parents, beginning a learning process that grew into a love of the art.

However, due to a cut in funding for school arts programs, local youths may not get that opportunity to discover a passion for music like Dolan did.

"I was lucky enough growing up that I had parents that could give me whatever I wanted to try out – learning an instrument, a certain type of art," Dolan said. "Not everybody is that lucky and school is the only place where they can do it. I think that the things that I grew up with ought not to be a privilege just because I was lucky enough to be born into this kind of family, but should be a right for any child that wants to explore them."

Instead of just discussing his feelings on the matter with some silly journalist, Dolan decided to do something to help give the younger generation the chance to discover a new passion.

He decided to Rock for the Arts.

A one-day benefit concert, Rock for the Arts will present six hours of live entertainment Saturday, Aug. 25 at Forward Hall to help combat the budget cuts for local arts programs. For a donation of $10 for adults or $5 for students with a valid student ID, you cannot only help contribute to the next generation of musicians, but also see several examples of such an opportunity on stage.

"I've seen the benefit concerts that have been held for the March of Dimes, for breast cancer, for the John Kanzius stuff," Dolan, the executive coordinator for Rock for the Arts, said. "I thought that a benefit concert to raise money for the arts would be successful and be well-received by the community, and be fun to put on too."

Dolan will be partaking in the festivities as more than just a spectator and coordinator, as he will also perform for the Forward Hall crowd as part of his band Good Weather for Ducks. Indie rockers Falling Hollywood, pop-punkers The Romantic Era, jam band Chasing Moira, cover band favorites Thirst N' Howl, and alternative group The Hannigans round out a diverse lineup that Dolan arranged to offer something for everyone.

In addition to the performers, Rock for the Arts will also feature a variety of art displays, jewelry, and hair striping and feathering, with portions of the proceeds going to the benefit.

While aiding the local arts programs is the main goal of Rock for the Arts, Dolan hopes that his part in the event can show that age isn't a liability.

"As executive coordinator, I had final say in whatever was going on, because I wanted to make the point that a young person could put this together, working with adults," Dolan said. "I wanted to show other people in my generation that they could put something together that could have an impact."

Thanks to his part, Rock for the Arts can help shape the next generation of musicians in Erie. With the potential for opportunity at stake, you should take the chance to support the growth of the arts.