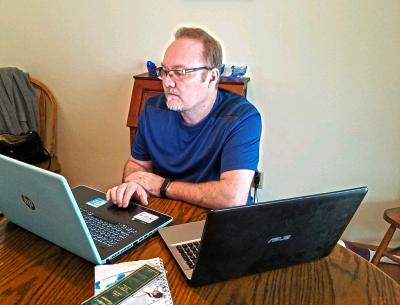 Stroll the streets of London with Jack the Ripper. Learn the tale of a doctor tormented by the ghost of his wife, who he killed. Read about the world through the lens of a Victorian-era horror story.

From Mary Shelley to Edgar Allen Poe to Dean Koontz, William Todd draws inspiration for his short stories from a different kind of fear.

Todd said he considers himself a "traditionalist if there is such a thing for horror."

After getting a late start to writing in his early 20s, Todd found his calling writing short horror stories set in the 19th century. He bases his writing more in mystery than blood and gore. He tends to favor the Victorian era due to his fascination with looming figures like Dracula, Frankenstein, and Jack the Ripper, rather than modern slashers like Freddie Kruger or Michael Meyers.

"The type of horror I usually write causes you to use your mind a little more and tends to let the audience fill in the blanks," Todd said. "Not quite knowing 'what is there' is scarier than someone chasing after you with a bloody ax."

In his 20s, Todd became enthralled with the world created by certain authors and wondered if he could emulate that on his own. He takes pride in his ability to set a scene that transports the reader to a different period.

When talking about the essential parts of any good horror story, Todd said the most significant investment comes in the form of research and atmospheric details.

In one of his stories, Todd places the reader in Downtown Erie where he describes the shadows that lurk in the halls of Hamot in the midst of a man's death and the horseshoe factory his son owned on 12th Street, along with other historical elements.

Todd draws on personal significance as well, including his daughter, who has Down syndrome. One story is told from the perspective of a girl with Down syndrome who experiences life — with a werewolf father.

He writes about religion as well due to his background in Catholicism (like his 2014 story "Why Catholic?: Answering Protestant Objections To Catholicism"). Just like traditional horror stories, Todd incorporates elements like the obligatory crucifix thrust in the face of a monster.

Todd mentioned his own experiences with ghost stories as well, describing an encounter in his house where one of his daughter's toy cars started lighting up and making noises at 2 a.m. He often hears whispers and sees shadows throughout the home too.

"I'm sure it all has a rational explanation, but it is fun to think of as creepy," Todd said as he pointed out the chills running down his back as he spoke about it.

This supernatural contact coincides with his story "Return of Captain Jack," where the main character meets various people while fighting for his life on the operating table, ultimately finding out they are ghosts pulling him toward his demise.

Todd said his biggest downfall as an author is his distaste for certain types of horror writing. He talked about how people will cross a line to drive sales, but he instead focuses on the plotline and allows the readers' imagination to run with the story.

"I don't write horror just for the sake of a scare," Todd said. "I like the theme to come through."

Todd is a self-published author through Amazon, primarily selling his work in digital form for devices like the Kindle or iPad, though many of his books are also available in paperback. At the beginning of his career, Todd experienced trouble with publishing agencies as his first book (2008's *Bumps in the Night) was only out for a week when the publisher shut down entirely, and he never saw any money from those sales.

"I actually stopped writing for four or five years after that because I was so frustrated," Todd said. "If you don't have a number-one best-seller, you won't get published. If you think it's good enough to go out there, you have to do it yourself." He ended up doing just that, releasing *Dead of Night in 2016 via Createspace and on Kindle by Kindle Direct Publishing.

Todd most recently released a book in June, title *Something Wicked This Way Comes! Much of the story is set at sea in the 1880s on Lake Erie, on a ship traveling from Toledo, Ohio to Buffalo, N.Y., and its cover art possibly gives a wink to the works of H.P. Lovecraft — another influence cited by the author.

Todd alternates between Sherlock Holmes fan fiction and horror stories, commenting on how the ideas in each story pay homage to the other genre and vice versa.

However, Todd's remains dedicated to scary stories as Halloween comes around once again. It *ghost without saying that Todd's love for Victorian-era horror will continue for years to come.

William Todd's work can be found on Amazon and on Facebook @billscreativepen. Chloe Forbes can be reached at cforbes@eriereader.com