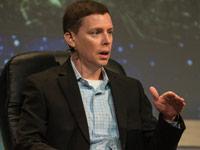 Personal insults, attack ads, and divisive, fear-based campaigns have dissuaded thousands of would-be voters from casting their ballots in both local and national elections. What those "maybe-I'll-vote, maybe-I-won't" citizens prefer instead is to hear about the challenges facing their community and what real-world solutions will benefit them and their neighbors.

The podcast will feature interviews with elected officials, grassroots leaders, and extraordinary citizens from PA 16 and will be hosted by me, Jim Roddy, an Erie native who has 25 years of experience in publishing, broadcasting, and podcasting. Today's political discussions are full of sound bites, name-calling, and stereotyping. This podcast will be different. We'll have common-sense conversations with local experts and people who are volunteering their time to make a difference in our community. Our discussions will also highlight the lack of moral leadership and lack of decency in our political discourse and in Washington, D.C. today.

Among the guests to be featured on October Surprise are:

Judy Hines, a retired schoolteacher who advocates for both farmers and students in Mercer County

Felix Lohitai, a Sudanese refugee who assists other New Americans in Erie

Tyler Titus, an Erie School Board member who has witnessed firsthand the opioid crisis and its impact on area students and families

Jim Wertz, an instructor at Edinboro University and the Erie County Democratic Chairman

The podcast's preview episode is available now through iTunes and via the October Surprise podcast Facebook page, but the first three episodes won't launch until October 1. Nine additional episodes will be distributed throughout the month on iTunes, Facebook, and the Erie Reader website. We're launching our content only in the weeks leading up to Election Day because that's when people who aren't political diehards will truly start paying attention to the mid-term elections. We're trying to reach those on-the-fence voters and will encourage them to make their voices heard when we vote on Nov. 6.

As for the name, an "October Surprise" is defined as an orchestrated political event the month before an election in the hopes of affecting the outcome. Most October Surprises are negative — a secret recording or damaging memo being released to the public — but this podcast is designed to be positive. Our discussions should appeal to Independents, Democrats, and Republicans alike because we intend on putting people ahead of party. We'll do a lot of talking, of course, but our ultimate goal is action. We're going to surprise the special interest groups, the political action committees, and the big money when we take back our district on Tuesday, November 6, and once again put people first.

October Surprise is a grassroots movement that is supporting Ron DiNicola's candidacy but it's not affiliated with the DiNicola campaign and neither myself nor my guests are campaign spokespeople.

I'm not a political veteran or a campaign strategist. I'm just a citizen trying to figure out how our community should move forward. I don't have all the answers but I'm going to dig for them and our listeners get to come along for the ride. Together we're going to learn what's happening in our district and what actions our next congressman should take to help us overcome these challenges.

Jim Roddy graduated from Bethel Christian School and Gannon University. He broadcast Gannon games on local radio for eight seasons and published the Gannon Hoops blog, as well as SportLook magazine and the Millcreek Independent Beacon, and (as a survivor) authored Hire Like You Just Beat Cancer in 2012. He can be contacted at jimroddyerie@gmail.com.

VN6: An Appeal to the Ethical Voter