Love In the Time of Corona a Fascinating Gamble 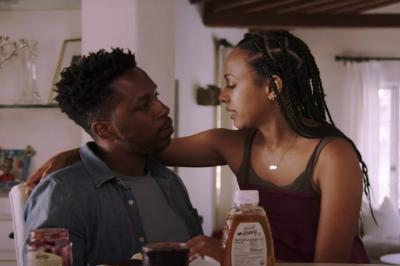 Alot has been said about the pandemic, and much, much more will be said. For one of the countless industries irrevocably changed by COVID-19 — that of film and television production — some things ground to a halt. Many aspects of the job can be done remotely, like special effects and editing. A continuous stream of post-production work goes on, letting previously-filmed works steadily trickle out. This also makes releases feasible for things like a documentary series or animation. Traditional shows though? Not so much.

Enter the too-on-the-nose Love In the Time of Corona, a fascinating time capsule of a miniseries from Joanna Johnson (Good Trouble, Hope & Faith). The four-episode series follows four different storylines (think Love Actually) concurrently set in the early days of quarantine life. The show casts actors that specifically had been sheltering together. It follows, then, that these groups are families and real-life couples. Filmed on location in the actors' houses, the cast wore their own clothes and did their own makeup. Crew members posted in individual tents and the director communicated via walkie-talkie.

[Spoiler alerts ahead] There's Leslie Odom Jr. and Nicolette Robinson, who rethink having another child amidst Black Lives Matter protests. L. Scott Caldwell plays Odom's mother, who is planning an anniversary party for her husband suffering from dementia while her other son moves back in after being laid off. Rya Kihlstedt and Gil Bellows try to hide their impending divorce from their real-life daughter Ava, back from college. And then there are star-crossed roommates Rainey Qualley and Tommy Dorfman, their handyman neighbor, and virtual dates.

While the threat of COVID-19 remains very real, we're not in the same mindset we were in March and April. Places like Los Angeles have eased filming restrictions. As one of the first real efforts post COVID-19, does Love in the Time of Corona live up to its position? Again, not so much.

Love In the Time of Corona might be groundbreaking work, but it's far from groundbreaking content, somehow being both heavy-handed and tone-deaf at the same time. Sociological context aside, it's not without its touching moments, like the ending, underpinned with a song from Qualley. While the behind the scenes story is surely more interesting than it's actual plot, its rom-com-dram schmaltz is ultimately successful, and with a runtime shorter than some studio films, it doesn't ask much of the viewer. — Nick Warren