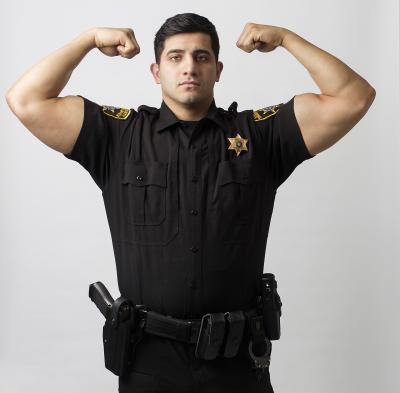 Maitham Basha-Agha
Youssif Almusawi, the first Iraqi-American to work for the Erie County Sherriff, hopes that both he and local law enforcement can flex their muscles to the benefit of citizens of all backgrounds.

Maitham Basha-Agha: Youssif, please tell me where are you from.

Youssif Almusawi: I was born in Rafha, Saudi Arabia but my family escaped from Iraq during the 1991 Gulf War. My father refused to fight in the military and was against the ruling of Hussein's regime at the time. They shot my grandparents' house with weapons and bullets. My family, including my grandparents, had no choice but to flee.

We lived in a concrete house and didn't have much at the refugee camp. My dad was selling Kebab sandwiches to make ends meet. He tried his best to make life easy and better for us.

YA: My family and I were assigned by UNHCR to locate to Erie, PA in 1996, which is also where many of the former Iraqi refugees who currently reside in Erie came from. I was three years old at the time. Upon our arrival, my dad's friends greeted us and I remember how happy we were to be in America. We arrived here with $50. Life wasn't easy but we were happy and proud to be in America.

MB: You are now an American citizen. Please tell us what it means to you to be an American.

YA: It actually feels great. I love this country and what it stands for. Different political issues may [skew] the views at times but the base core of this country is respect, love, and freedom. People are being put down in many ways, but at the end there are always people here to lift you up.

MB: Can you please tell us why you entered law enforcement and the process you had to go through?

YA: I chose law enforcement because of the neighborhood I grew up in. I was raised on the lower East side of town, which wasn't the best area in the 90s and early 2000s. There were a couple of shootings and my family was a victim to one. I remember an incident when a thief started shooting at my father with a gun. Luckily, no one was hurt and the thief was sent to prison.

Also, many of my childhood friends didn't choose the same path as I did. Many of them chose to get involved in gangs and drugs; some are in jail or have passed. I feel like law enforcement is something I can do to give back to the community. If I can help or protect one person it's a job well done. The process wasn't easy but I did it. I went to Mercyhurst College for three semesters and went through the six-month Police Academy for credits to complete my Act120 and earn an Associates Degree.

MB: You are the first Iraqi-American to be working for the Erie County Sheriff. How does it feel?

YA: It is a great feeling because I feel like it's a stepping-stone in the Iraqi-American chapter for the City of Erie. Our (Iraqi) community isn't the biggest in the area but it's nice to show that we're working and trying to provide a positive image. As of a right now, the Iraqi community is in a good shape. We have businesses but we are missing a great representation in City Hall and the political field in Erie.

MB: The Iraqi community must be proud of you for holding such a position.

YA: From what I know, they are proud. They express it in different ways; I have had parents asking me to speak to their kids about law enforcement and what they can do to get involved. It's honestly encouraging having so many people who have gone through the same thing as you being proud of your achievements.

MB: What are you hoping to achieve in your law enforcement career?

YA: I honestly hope to be able to work for the City of Erie and be able to give back to my community and help the people I grew up with. But my end goal is to work my way up through the ranks and someday being the Chief of Police for the city. I want to be the chief because this is where I grew up and Erie is diverse. Mexicans, Arabs, Africans, Whites, Blacks. We got it all.

All Hands on Deck at Ales for Sails