Aaron Rennel on the making of the recent Accepting Love EP 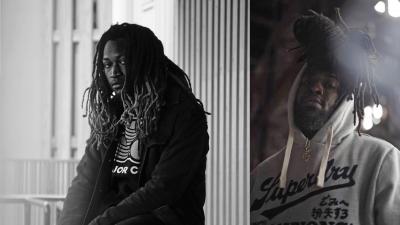 Entrepreneurial hip-hop group Major Coin have been on the grind to expand their name for years, drawing more and more people into their blueprint of music and fashion. Consisting of rappers and siblings Kenny Ba$e and Aaron Rennel, along with producer/engineer Chauncy Bill$up, the "Make It Stack" team continues to carve their own path, locking themselves in the studio to create memorable moments for the world to hear.

I had a chance to talk with Aaron Rennel about the thought process of putting the EP together.

"The overall theme and tone of the tape is what the title suggests; the acceptance of love," says Rennel. "As an independent artist, it can be easy to pay more attention to what's seemingly not going right than what is. So this was our attempt at cutting through the dissonance and existing as we truly are."

The first track off of the EP, "That's On Me," is a fun track that could easily kick off the summer with a braggadocious flow that explores the themes of independence and attracting love or lust because of it.

Falling into the Donnell Jones-inspired track "No Chasers," you can hear a bouncy pattern of rhymes that dives into a small story about an unhealthy relationship that calls for an important change in pace and discovering another option.

The songs and bars being traded between Rennel and Ba$e are something that the two songwriters have been doing for some time and their chemistry continues to grow.

"The idea of putting out a Valentine's Day tape came a few weeks before the actual date. I was sitting down discussing a potential drop with Kenny Ba$e at which point he suggested we do an EP, as we both were itching to put out new music." And as always, the duo was able to execute flawlessly. While Chauncy Bill$up has been the go-to producer for their sound throughout past projects, this time he stepped back into an engineering role, focusing on mixing and mastering vocals more than beats.

"Bill$up actually didn't produce any of these," Rennel says. "He handled the engineering." The production was taken care of by producers outside of the squad, yet still delivered a Major Coin sound that we all love and enjoy.

OmarWya, Geeohhs, and Julius Swervin' are just a few of the beatmakers who helped bring Accepting Love to life, but almost unintentionally. Rennel states, "We work with a variety of producers on a regular basis. So it felt like a move done in stride. The EP reads more like a compilation tape. The music that made the cut wasn't made specifically for this tape, but curated to create this experience."

What is unique about this body of work is that although it's an enjoyable ride, it comes from a real place that resides in both Rennel and Ba$e. Rennel claims that "Accepting Love was born out of the place both me and Ba$e were at mentally when the plan for the EP was hatched. Most of the songs were already recorded and needed polishing, so it's hard to say how we knew what topics to speak on. We didn't even know this EP was going to be a 'thing' at first."

Rennel wagered that "ultimately, we are both artists who value authenticity and who don't have an issue with expressing ourselves, our sentiments, or our viewpoints in this medium. We know what to talk about in our music because it is a reflection of our truest selves."

With Chey Honey, a female vocalist, as the only feature on the record, the transparency shines through in both a playful and serious tone between the artists. Whether it's date night or you're just getting your weekend started, this seven-track package is ready-made for many occasions, though it steers toward romantic themes.

Major Coin has prided itself on allowing the music to take people on a colorful expedition to please the ears. Each individual from the team has proven to us that they can hold their own separately, but when it's time to link up to work with one another, magic happens. Accepting Love is a wonderful post-Valentine's gift for us all to unwrap and cherish. The new project can be found on Spotify, Apple Music, and more.

Find out more about Major Coin at facebook.com/MajorCoinCo and majorcoinco.com.

Charles Brown can be reached at charlesbrowncj@gmail.com.