Mark Twain's Is He Dead?

Mark Twain? Cross-dressing? People faking their own deaths? Yep -- this one has it all.

by Alex Bieler
View ProfileFacebookTwitterInstagramGoogle+RSS Feed
July 23, 2014 at 9:15 AM 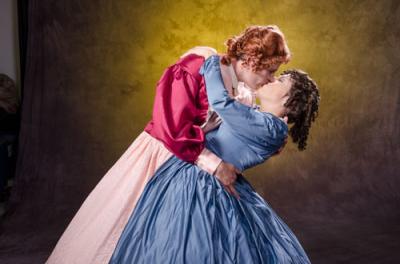 Vincent van Gogh. Edgar Allan Poe. Emily Dickenson. These are just a few members of a large group of artists who didn't earn their critical acclaim and overall fame until after they ceased to exist on this mortal plane. Mark Twain, however, was not one of them, but the success-after-death stories helped inspire Is He Dead?, a two-act play by the famous American artist formerly known as Samuel Langhorne Clemens that will finish off its local run at the Erie Playhouse from July 23 to July 27.

Is He Dead? focuses on the talented, but struggling artist Jean-Francois Millet and his inability to sell his work and pay off his debts. After a run-in with a potential buyer at an auction, the artist's pupils proceed with a plan to fake Millet's death so that his art would suddenly be in demand, all while Millet masquerades as his widowed twin sister "Daisy." Twain packs the play with his trademark witty satire, although Is He Dead? wasn't actually released until nearly 100 years after his own death when a Twain historian read the manuscript and had it published in book form.

Unlike van Gogh, Poe, and Dickenson, Twain experienced success during his lifetime, but Is He Dead? offers a glimpse at one of his works that, appropriately, slipped through the cracks until long after his living days. Even 104 years after Twain's death, we're still getting treated to more material from one of the greatest American humorists at the Erie Playhouse. – Alex Bieler